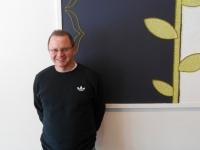 “They’re re-doing the building we were in,” explained Fisher. “Our space was being downsized, and it was priced more than we could afford.”

Fisher said he decided to move the store to Cleveland Heights, where he once lived, because he has always liked the city. “I really like that it has all of these walkable neighborhoods,” he said. “And it’s got a great mix of people. I’m looking forward to running in Cain Park next summer.”

Fisher grew up in the Youngstown area and attended Poland High School, then Bowling Green State University, where he majored in history. He was on the track and cross-country teams in both high school and college, and still runs about five days a week and takes part in 5-K and 10-K runs in the summer.

After graduating from college, Fisher took a job at Second Sole, an athletic-footwear store on Mayfield Road in Lyndhurst. He eventually became the manager of the store, and worked there until 2008.

After he left Second Sole, he frequently encountered former customers who told him they missed him. Eventually, he decided to open his own store. “Your customers become your friends,” he explained, “and I missed the interaction with them.”

Fisher said he loves to connect with the community. Every Saturday, the store will host running groups. “It’s a chance to meet people, and we give them tips on running. We also talk about nutrition and footwear,” Fisher said. Anyone can show up for the Saturday events, which begin at 8:30 a.m. “It doesn’t matter how fast or how slow you run,” Fisher said. “We break up into groups, and we run five to 10 miles, depending on what group you are in.”

This fall, the store plans to sponsor running groups for fourth-, fifth- and sixth-graders. The kids will train on Monday and Wednesday nights, in preparation for the two-mile Ohio Athletic Committee Cross-Country Championship race—an annual statewide event that usually takes place in the fall. Cleveland Running’s boys’ team won its division in 2013 and 2015, and the girls’ team won in 2014. “I’m really focused on trying to get kids interested in running and cross-country,” Fisher said.

Fisher hopes to establish relationships with the Cleveland Heights-University Heights City School District and the Cleveland Heights Recreation Department. “We will continue to seek opportunities to interact with our partners to promote running and exercise and to contribute meaningfully to our community,” said Fisher.

Fisher and his wife, Kathy, currently live in Lyndhurst. They have two children, Rebecca, 22, and Sam, 17.