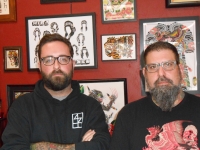 The Douglas Fine Arts Building, on the northwest corner of Cedar and Lee roads in Cleveland Heights, is seeing an influx of new businesses. Lucky Sparrow Tattoo opened on Feb. 4, and two takeout restaurants are coming soon. Tarita’s Wet Burritas is slated to open by the end of February, and the owner of Fresh & Meaty Burgers hopes to open his restaurant no later than early April.

Lucky Sparrow Tattoo has opened at 2128 Lee Road (216-505-5885), in the space previously occupied by Heights Guitars. The shop is open Tuesday through Saturday, noon to 8 p.m., and accepts walk-ins as well as advance appointments. Owner Tony DeRigo also owns Chronic Tattoo in Elyria, which he opened in 1994. “I had always been artistic,” he said, “then a friend told me I should try tattooing, and within a month I decided that this was what I wanted to do.”

In 2001, DeRigo played a major role in getting tattooing legalized in Cuyahoga County. “It was legal just about everywhere else in the state of Ohio,” he said, “and then the ACLU approached me about seeing what we could do to make it legal here. We wound up filing a lawsuit, and it was legalized.”

DeRigo will be at Lucky Sparrow one day a week; the Cleveland Heights shop will be run by Shawn Nutting, who worked at Chronic Tattoo for four years. Nutting, who lives in Ohio City, got into tattooing in 2001, while living in Alabama. “I’ve tattooed all over the world, and I think I bring a lot of experience and a lot of professionalism to the table,” he said. “There’s nothing on this side of Cleveland that can mimic what we do, in terms of scale, size and quality.”

“I’ve wanted to be in Cleveland forever,” DeRigo said. “And I’m excited to see how Cleveland Heights works out.” He plans to host musicians and guest artists at the shop, and to raise money for various charities.

Tarita’s Wet Burritas will focus on Mexican food, including burritos, tacos, tostados and nachos. According to owner Tarita Oates, it will be “a little different than what most people are used to,” noting that the food will have more of a West Coast style, and “a little more flair to it.”

Oates, 43, lives in South Euclid. She first discovered the West Coast-style of Mexican food in Colorado, where she was born and raised. She moved to Cleveland about 30 years ago, and always wondered why the Mexican food was different here.

Oates, who has never been in the restaurant business before, said she and her husband, Eddie, came up with the idea of opening a restaurant that would focus on this unique style of Mexican food.

Gerald Hood, owner of Fresh & Meaty Burgers, opened a Los Angeles Fresh & Meaty in January 1990, at the age of 22. The original restaurant is still open, and Hood is currently expanding the company, opening additional restaurants in California and Atlanta, as well as Cleveland Heights.

“I really wanted to focus on traditional American hamburgers, with no gimmicks,” he said. “A lot of places are trying to re-create the hamburger, but I keep it in the traditional style.”

Hood’s wife is from Cleveland, which Hood described as “my second home.” He lived in Cleveland Heights in the late 1980s, and when he came back to visit recently, he saw that the space on the corner of Cedar and Lee roads, previously occupied by Heights Soul Food and Grill, was vacant. “It took me about six months to secure a lease,” said Hood, “but now we’re ready to go!”

Fresh & Meaty sells beef, turkey and veggie burgers. “We have the best turkey burger in Southern California,” said Hood. “And, at our restaurant there, we sell more turkey burgers than beef burgers. All of the ingredients we use are of the highest grade, and we get all of our meat and produce delivered daily.” The French fries are fresh-cut, never frozen, and the menu also includes tacos and chicken breast and catfish specials.