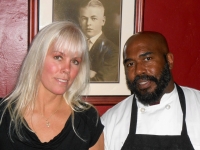 Amanda Elfers and Quintin Jones, owners of Rudy's Pub. The pub was named for Elfers' great-uncle, Rudolph Volger, in the photo behind them.

Rudy’s Pub, which had been on Van Aken Road near Warrensville Center Road in Shaker Heights for nearly a decade, has re-opened in the Cedar Lee neighborhood of Cleveland Heights. The restaurant is now located 2191 Lee Road, in the space previously occupied by the Cedar Lee Pub, which closed temporarily in October 2014, and then closed permanently in 2015.

Quintin Jones and Amanda Elfers, who are engaged to be married, own the pub. They closed the Shaker Heights location in October 2015 because of all of the construction and redevelopment going on in that neighborhood. Then, a couple of their regular customers told them about the Cedar Lee Pub space. Jones and Elfers came by, thought it would be a great spot for their restaurant, called the building’s owner and rented the space.

It took them only about three weeks to prepare for the restaurant’s opening. “We painted the interior, did the woodwork, re-varnished the floors and painted the bathrooms,” said Jones. “And we got it done quick enough that we were able to open on Dec. 11.”

Jones is Rudy’s chef, while Elfers serves as the bartender. The pub is named for Elfers’ great-uncle, Rudolph Volger, who died of tuberculosis at the age of 24, back in 1925. There are photos of him on the restaurant’s walls. "The image of my great-uncle always stood out to me, and the story of how he died at such a young age always moved me," explained Elfers. "Rudy's Pub sounded like a great name for a neighborhood bar, and now he's back. We have his photo here on the wall, and he's the center point of the restaurant."

Elfers, 48, grew up in Milan, Ohio. When she was 18, she and her mother moved to Cape Cod. She attended the University of Massachusetts, which she earned a bachelor’s degree in humanities. She then earned a master’s degree in liberal arts from Harvard University. In 1990, while she was working on her master’s degree, Elfers went to Russia. “I went back and forth between the U.S. and Russia several times,” she said. “I took classes in the Soviet Union, and I worked at a bank in St. Petersburg, for a while. It was a great experience. I finally came back to the U.S. permanently in 1994.”

Elfers had been interested in the restaurant world since she was very young. When she was 12, Elfers started playing piano in a restaurant. “Throughout college,” recalled Elfers, “I worked as a bartender at restaurants. I’ve always like bartending.”

After returning to Cleveland, Elfers started going to Noggin’s Raw Bar and Pub in Shaker Heights. In 2006, she bought the bar and turned it into Rudy’s Pub. In 2009, Jones came into Rudy’s. “I liked it,” he said, “and I started coming back. I noticed that they needed help in the kitchen, and I offered to work there. That started my relationship with Amanda and the restaurant.”

Jones, 54, had worked as a chef at Noggin’s for five years. He grew up in Warrensville and attended Warrensville Heights High School. After graduating, he went into the U.S. Army. He did three years of active duty and then spent 25 years in the Army Reserve. He started cooking while in the Army, and, in 1984, spent a year in Cuyahoga Community College’s culinary program.

Over the years, Jones has worked at several restaurants in the Cleveland area, including Moxie, the Oakwood Country Club and Lopez y Gonzalez. He also had his own restaurant, Q’s Diner, on Bellaire Road near West 130th Street.

Jones’ son, Patrick Jones, is Rudy’s sous chef. He’s 21, and has been working with his father for the past three years.

Rudy’s full menu offers salads, sandwiches, pasta, seafood, meat entrees and desserts. Rudy’s owners plan to feature DJ music on Friday and Saturday nights, and karaoke on Wednesday nights. On Mondays and Thursdays, Rudy’s will offer 50-cent wing nights, and will feature Ladies’ Night on Tuesdays, when drinks will be available to women at Happy Hour prices all night. In the spring and summer, they plan to have bands performing on the back patio.