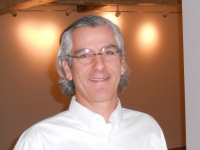 A new art gallery—Foothill Galleries of the Photo Succession—will be opening this month in Cleveland Heights’s Cedar Fairmount Business District. Michael Weil is owner of the new photography gallery, located at 2450 Fairmount Blvd.

A lifelong Cleveland Heights resident, Weil, 49, has been interested in photography since he was a child. He taught art history and photography as an adjunct professor at Case Western Reserve University, and is currently an adjunct professor at the Cleveland Institute of Art. “Over the last decade, I began focusing more and more on my own photography,” he said. “I became more serious about wanting to exhibit my own work, but there were no galleries in this area committed to photography.”

Weil said he had thought about opening a gallery for two or three years, then found out that space was available in the Heights Medical Building. Initially, he planned to use the space only as his office, for his own photography work and the printing of photos. Then he realized the space was large enough to accommodate a gallery.

The first exhibit, The Justification of the Judgement, will open in mid-January, and will feature Weil’s photography. “It’s really about my experiences with my son Josh,” Weil said. Josh, then a senior at Hawken School, was killed last May in a car accident on County Line Road in Gates Mills. “The show is going to be based on places where we traveled together,” Weil said, “and it will also show a lot of the experiences we had together.”

Weil, who is married, is the father of another son, Sam, 21, who is studying film at Tulane University.

Weil plans to have three or four different shows a year. “The idea is that I will show my own work and also the work of other photographers, both locally and beyond,” he said. Gallery admission is free, and the hours will depend on when Weil can be at the space.

Weil, who lives on Chatfield Drive in Cleveland Heights, majored in English at Hobart College in upstate New York. He earned a master’s degree and a Ph.D. in art history at Case Western Reserve University. He is on the board of Heights Arts, and served as its president in 2013 and 2014.

Weil said he has always loved Cleveland Heights, especially Cedar Fairmount: “I love the trees, the architecture, the neighborhoods, the walking paths in this city. And the Cedar Fairmount area is so impressive.

"You can get almost anything you want or need here. You can get breakfast, coffee, lunch, dinner. And there’s Dave’s grocery store, Nighttown, banks, entertainment and on and on. It’s a very energetic, positive, feel-good area. And it’s a multi-generational neighborhood.”