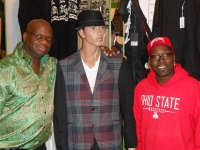 Clarence Allen had always loved shopping at Jeanology, the clothing store at 2110 South Taylor Road that originally opened in 2006. In 2012, he stopped by and noticed that the owners had not been re-stocking the store. “I asked the owner, and he told me he was thinking about closing,” Allen said. Over the next two years, when Allen would drive by the shop, “it looked abandoned,” he recalled.

The store officially closed in December 2013. Then, in November 2014, Allen saw a “For Rent” sign on the front of the store. “I called the number on the sign,” Allen said, “and the owners of the building said they wanted to rent the space.” So Allen called Andrew Jackson, who had been the owner of Jeanology. “He asked me what my plans were,” Allen said, “and I told him I wanted to get Jeanology re-opened.”

Allen teamed up with a longtime friend of his, Rick Steele, and the two took over the ownership of the store in January 2015. Under their leadership, the store re-opened on March 5.

Allen, 50, grew up in Garfield Heights. He and Steele, who have been friends for more than 40 years, both attended John F. Kennedy High School in Cleveland. Allen attended Cuyahoga Community College, where he earned an associate degree. He went on to Capital University in Columbus, where he got a bachelor’s degree in social work. He then earned a master’s degree in social work from Walden University in Minnesota.

In addition to running Jeanology, Allen provides alcohol and drug counseling at the Cleveland Clinic. He lives in Warrensville Heights, and he has two sons, 24 and 25 years old.

Steele, 53, is a master cosmetologist who has been cutting and styling hair since 1985. For more than 10 years, he’s worked at Best Cuts in Severance Town Center. He lives in Euclid and has two daughters, ages 15 and 25. “Clarence and I have been into fashion since we were kids,” Steele said. “When Clarence presented this idea to me, it just lit up!”

Jeanology’s slogan is “the art and science of wearing jeans,” but the store sells a wide variety of clothing for both men and women. It carries numerous styles of jeans not seen in other stores. “We have a lot of different designers,” Allen said. “Some of our jeans are made in Los Angeles, and some are made in France.” The store also carries a line of shirts made in Italy.

Allen said one of his goals is to get more involved with the community and start doing more community service. Last spring, Jeanology donated free tuxedos to the students with the best grades at Heights High, so they could wear them at their graduation ceremony and prom. The store plans to do the same thing this year.

One of Jeanology’s employees, Matthew Billingsley, is a senior at Heights High. He has been working at the store for five months, and loves it. “I think Jeanology is the best urban-to-suburban retail clothing store in Greater Cleveland,” he said.

The store also carries cologne and perfume, shoes, coats, belts and other accessories, and has a “$20 Table”—all of the clothing there, including jeans, can be purchased for $20.

The store has started a new rewards card program. “If you shop here five times,” Allen said, “we’ll give you a free pair of jeans.”

Jeanology employees will special order items for customers. “If you can’t find something in the store, we’ll order it for you,” Allen said. “We have relationships with most clothing distributors around the country, so we can get almost anything a customer might want.”

On March 4, Jeanology will produce a spring fashion show at the Holiday Inn on Rockside Road in Independence “We’ll be showing spring and summer fashions—a lot of fashion items that will be coming out later in the year,” said Allen.

Allen said his goal is to expand the business and possibly open a second store in the future.