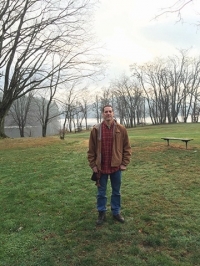 Cleveland Heights native Joe Mendes has left his teaching job in the Cleveland Heights-University Heights City School District to realize a lifelong dream to run a summer camp. He is the new owner of Camp Firebird-Roosevelt on Leesville Lake, 90 miles south of here.

Many Heights residents have fond memories of the overnight camp, which for years has hosted a steady stream of children from the area. But Mendes will have his work cut out for him—attendance dwindled in the past decade under the previous management.

Mendes is undaunted. “That’s why I was able to afford to buy it,” he said, adding that he’s been able to assemble a team of expert advisors to guide him.

The deal was struck quickly. Mendes learned on Sept. 9 that the camp was for sale, after the unexpected death of owner Andrew Schwartz—who turned out to be a childhood friend of Mendes from their own shared camp experience in northern Wisconsin. The transaction was done by early November.

“In every way, this was just meant to be,” Mendes said. “When I first went to look at the property, I was prepared for the worst. But I’m standing there looking at the trees, the lake, the barn . . . I knew it was right.”

Mendes graduated from Heights High in 1980 and, after college, taught in Colorado, California and East Cleveland’s Shaw High School. Along the way, he directed a teen pregnancy program; worked in a Cambodian/Vietnamese refugee camp in Thailand; directed the Vermont Youth Conservation Corps camp; and served on the board of Camp For All Kids, a nonprofit in St. Louis that promotes racial diversity by sending disadvantaged children to summer camp.

In the mid-1990s, at about the same time he met his future wife Cynthia Larsen—co-founder of the Lake Erie Ink youth writing program—Mendes began a five-year quest to own and operate a summer camp.

“My first job pursuing the camp dream was cleaning toilets at a summer camp—on my honeymoon,” he said.

After five years though, the right opportunity hadn’t appeared. So in 2000, Mendes brought his young family home, and was hired to teach at Coventry Elementary School. He later moved to Gearity Professional Development School in University Heights, teaching fourth grade and, among other projects, establishing the Seeds of Success learning garden.

“The dream was still here,” to own a camp, he said, “but I had moved on. I didn’t expect at this point that it would ever happen. I’m as surprised as anyone.”

The co-ed camp will cost $900 a week next summer, and campers can attend for two, four, six or eight weeks. A ninth week will be offered for families with children who aren’t yet ready to attend on their own.

The camp’s focus will be on leadership, citizenship and service. “Camp is fun, but it’s more than that,” Mendes said. “Its activities are a context for how to get along in the world—how to be independent, make healthy relationships, resolve conflicts and develop a sense of greater good.”