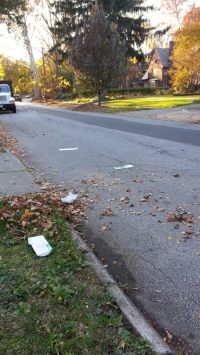 In some places, more copies of ShopCLE seem to be dropped on the street than on private property, as the law requires. [Photo by Sarah Wean.]

Each Wednesday for the past few months, ShopCLE, a free "shopper" publication produced by the Plain Dealer and Cleveland.com, has literally hit the streets in Cleveland Heights. It's raising ire among residents because many copies, wrapped in thin plastic bags, don't land on private property, perhaps violating the city's littering law.

Residents have complained to city administrators and council members, saying the papers sit for days or weeks on streets and treelawns.

Section 527.09 of the littering ordinance states: "No person shall throw or deposit any commercial or noncommercial handbill in or upon any sidewalk, street or other public property."

On Nov. 2, residents Gail Larson and Carla Rautenberg complained about the haphazard distribution of ShopCLE to Cleveland Heights City Council. “If these bagged papers are not picked up and are carried into the sewers, the plastic of the bags will eventually break down and pollute Lake Erie, our drinking water,” Rautenberg said.

Mayor Dennis Wilcox asked city staff if the Plain Dealer could be cited for littering. City Law Director Jim Juliano replied: “The Plain Dealer will rely every time on its First Amendment rights [to free speech], but we also have litter ordinances, so we're in discussion [with them].”

An inquiry to the Plain Dealer was referred to Cathy McBride, who said she is president of Brunswick-based AOZ Trucking, but whose LinkedIn profile says she is depot manager at Plain Dealer Publishing. Talking from an office phone at the Plain Dealer, McBride said it's a new product and acknowledged “bumps in the road.”

“The delivery standard for ShopCLE is to place them in a home’s driveway closer than the sidewalk,” McBride said. “It is silly that they are landing in the streets.”

She said AOZ hires subcontractors who do the delivery. “[Because] the deliverers are independent contractors, we don’t tell them exactly how to do their job,” she said. “We are addressing each complaint swiftly. We take the delivery of ShopCLE seriously.”

By mid-November there were some signs of change. Writing on Facebook, Gail Draxton Larson, who lives in the Monticello neighborhood, said one delivery driver told her they had been instructed to drive into each driveway to ensure papers landed on private property. But spotters the following week found other instances where delivery accuracy had not improved.

Some Cleveland Heights residents are working with the Northeast Ohio chapter of the Sierra Club to address the concern about papers entering the sewers. There have been active discussions on the Nextdoor.com social media site; and a public Facebook group (facebook.com/groups/shopcle/) is documenting complaints.

To opt out of receiving ShopCLE at your address, call 888-440-4216 or visit shopgreatercleveland.com.