Heights barbershoppers give back 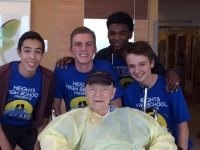 As Cleveland Heights City Council Member Melissa Yasinow drove to work on the morning of Friday, Nov. 6, her mind was on her grandfather. Stuck in a hospital, hooked to machines, what would cheer him up? Blind for several years, he couldn't watch a Cavs game or enjoy a new book. What would bring some joy to this beloved old man’s day?

Meanwhile, across town, Cleveland Heights High School musicians were sitting in class, exhausted from weeks of intense rehearsals for the musical "Grease" and gearing up for a weekend with four full-length performances. If anyone had asked them to find an extra couple of hours in their day, the students would have thought they were crazy.

But then Yasinow was struck with an idea: Her Papa may not be able to see, but he could definitely hear. After a few quick phone calls, and the willing approval of school administrators, four members of the nationally recognized Heights Barbershoppers were pulled from their classes to rehearse for another type of show altogether.

It was all to honor their hero, James Yasinow, a 1949 Heights graduate and a member of the CHHS Alumni Hall of Fame. Yasinow didn’t participate in music when he was a student at Heights because there wasn’t much of a program in those days. But as a longtime resident of the community, he had followed the impressive rise of the music department over the years, and reached out to share his own passion in 2006. As a member of the Cleveland East Suburbanaires, he wanted to encourage the school's vocal music director, Craig McGaughey, to start an a cappella barbershop group. But McGaughey was busy and the musicians were fully booked already, so he put off Yasinow’s repeated phone calls for weeks on end. Finally broken by Yasinow’s persistence, the Suburbanaires were invited in for a visit.

Current high school senior Graham Ball described the visit, a story that has been passed down as part of the lore of the Heights music department. “Picture four bald, old white guys walking into the fourth-floor music room, filled with mostly black teenagers. Everyone looked around like, ‘Really?’ But then they started singing, and the students were mesmerized by what they could do.” Inspired by the intricacies of mixed harmonies, McGaughey and the students quickly established the Heights Barbershoppers, who have been guided and supported by the Suburbanaires ever since. Yasinow’s group has provided scholarships for students to attend Harmony Camp at The Ohio State University, and the two groups have performed in each other’s shows.

So, Ball and fellow Barbershoppers Maurice Powers and Orion Brock, both seniors, and sophomore Grant Heineman were eager to give back, and spent Friday rehearsing some songs they had heard Yasinow sing. By 2 p.m. that afternoon, the impromptu quartet was on its way to Ahuja Medical Center in Beachwood for the big reveal. Melissa Yasinow, her husband, Matt, and her aunt, Debbie Yasinow, wheeled an unsuspecting James Yasinow out to the lobby, where the boys gathered in front of him. He couldn't see them and it wasn’t until they started singing that a big smile spread over his face. “I watched his whole face light up,” said Melissa. When she told him who was there, he shook his head in wonder and said, “Well, how about that!”

Nurses and other patients gathered around to enjoy the show, which comprised five songs, including “Coney Island Baby,” which the boys had learned just that afternoon as a special tribute. Yasinow sang along, tapping his feet, tubes attached to an IV pole at his side. [To view the video, visit www.youtube.com/watch?v=lfu97eE0Pjo.]

“It felt really good to be able to make him so happy,” said Ball. “It was one small way to thank him for all he’s given to us.”

Khesha King was working on the floor that day and said the performance moved her to tears. “This needs to happen in the hospital more often,” she said. “Music and laughter are the best medicine.”

Yasinow agreed: “I think music is a great way to enhance your life. Even if you’re just an audience member.”

Krissy Dietrich Gallagher is a graduate of the Heights schools and a former Coventry School teacher. She is active in the Fairfax PTA, and is proud to raise her two sons in this community. She blogs at http://krissygallagher.wordpress.com.