Danay Johnson is a whirlwind of energy 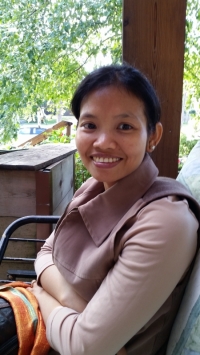 When Keith Johnson of Cleveland Heights checked in to the Golden Temple Villa Hotel in Siem Reap, Cambodia, in 2007, he had no idea that his life was about to change, nor did the manager of the boutique hotel, Danay Sopheakkdey. Two years later, Danay and Keith got married in a traditional Cambodian ceremony, and she moved to Cleveland Heights.

“When you come here, you start from the beginning, like a baby,” said Danay Johnson. “You don’t know about the simple things.” It took two years for her to improve her English and begin to feel comfortable living in America.

Johnson was born in a village in Kampong Cham province, Cambodia. When she was six years old her parents divorced and her father left the family of five to fend for themselves. Both of her parents’ families suffered losses during the reign of the Khmer Rouge. Her father served in the military and her mother suffered from depression and PTSD from the war years. Initially, her two older siblings supported the family, but at the age of 16 she had to stop her education and find work to support her mother and two younger siblings. She often worked seven days a week, 16 hours a day, to earn enough money.

In Cambodia, some people do not believe in educating girls “as they just get married,” Johnson said. "I strongly believe in education. Because of it, I was able to support myself and my family.” Over a period of 10 years, and while pursuing her education part time, she was promoted from the position of server to hotel manager. When her future husband proposed marriage, Johnson’s family encouraged her to start her new life, as they were now able to support themselves.

Johnson demonstrates a remarkable sense of “giving back” to all those who helped her and her family. She started a business, called Khmer Designs, which imports and sells silk accessories, handmade by the residents of her village. These products are sold exclusively in Galeria Quetzal in Little Italy. Some of the proceeds are used to fund her  Scholarship for Excellence, for other Cambodians who are new to the U.S. The first two scholarships were awarded this year. Johnson is acutely aware that “without other people helping me, I would not be successful either.”

Johnson enrolled in Tri-C’s Metro Campus in 2011, and was accepted into the Thrive student entrepreneur business incubator. She emphasizes her desire to always be “growing,” to learn new things and constantly challenge herself. She took advantage of all the extracurricular activities and workshops Tri-C offers, and graduated in 2013. She then enrolled in Cleveland State University for her bachelor’s degree in international business. She also finds time to volunteer at Heights Arts, the Cleveland Botanical Garden, North Union Farmers Market, Little Sisters of the Poor, St. Malachi Church and the Phi Kappa Theta Honor Society. Johnson recently completed an internship in the sales department at Mayfran International, a conveyor manufacturer. “If I can sell conveyers," she said, "I can do anything.”

Johnson loves living in Cleveland Heights because of its diversity, peacefulness and friendly people. She loves the trees and the changing seasons, which she prefers to the wet and dry seasons in Cambodia. She values family above all. She believes in treating people the way she wants to be treated. She reminds her siblings never to forget where they came from and to appreciate all the opportunities that come their way. “I always want to learn and I always want to grow”—that, said Johnson, is the motto of her life.