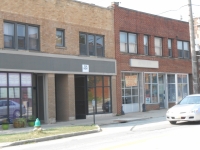 A stretch of empty storefronts along Lee Road. Photo by James Henke.

The Cedar Lee Business District has been going through some challenging times over the past couple of years. More than a dozen stores and restaurants have closed. Despite that, most of the area’s merchants are optimistic about the future.

“I don’t think that the closing of the retail spaces is a sign that our neighborhood is unhealthy,” said Sue Wolpert. “I think we have a very healthy and strong neighborhood.” Wolpert and her husband, Ray Lesser, own the building at 2174 Lee Road. Funny Times, a monthly paper that they publish, has its offices in the building, and Serendipity Space, which they also owned, was on the street level of the building. However, Serendipity has closed, and Wolpert and Lesser are currently looking for a new occupant for that space.

John Zagara, president of Zagara’s Marketplace at 1940 Lee Road and president of Cedar Lee Special Improvement District (CLSID), concurred, saying, “This area is the strongest I have ever seen [in terms] of consumers who support independent businesses.”

One Cedar Lee merchant, who asked to remain anonymous, said he thought that the murder of Jim Brennan, owner of Brennan’s Colony restaurant, in June 2014, and the October 2014 arson fire at the Katz Club Diner, had a negative impact on the district. Three businesses—Sweetie Fry, Cedar Lee Pub & Grill and Unique Melodies boutique—closed their doors soon after the fire, and the neighborhood began getting negative press.

“It hurts us so much that the media is continually harping about the negatives in Cleveland Heights,” said Jeff Coryell, Cleveland Heights City Council member. “I would like to see a more effective marketing campaign for the Heights in general.”

Coryell is part of a group working to form the Heights Community Development Alliance, which would work to enhance the reputation of Cleveland Heights. Zagara is also a member of the group, as are the owners of several other Cedar Lee businesses. The alliance is still in development, and FutureHeights, Heights Arts, the City of Cleveland Heights, the Cleveland Heights-University Heights City School District and CLSID are all involved.

The alliance would create programs to address some of the issues that Cedar Lee is facing, including vacant storefronts, fewer visitors, lower sales and negative publicity. Recognizing that other areas of the city face similar issues, the alliance hopes to create programs that could be implemented citywide. Its overall goal is to leverage the city’s unique assets, attract and retain new residents, businesses and visitors, and create and promote a welcoming, safe, vibrant and sustainable community that is among the most desirable in which to live, work, play and shop.

The alliance has much to accomplish. Many sections of the Cedar Lee neighborhood are filled with empty storefronts, particularly on the west side of the street. Those blocks include the stretch between Meadowbrook Boulevard and Kensington Road, between Cedar and East Derbyshire roads, and between CVS and Dewey’s Pizza.

The district’s namesake, the intersection of Cedar and Lee roads, has several vacancies. Abrash Gallerie, on the southwest corner, closed on Sept. 7, and Heights Soul Food and Grill, the most recent occupant of the northwest corner, has also closed. Heights Guitars, located just north of the intersection, closed in March 2014, and the Grab ‘n’ Go Pizza Express recently closed its doors.

Although Internet retail sales have harmed sales at brick-and-mortar stores everywhere, Cedar Lee has also lost several restaurants. In addition to those mentioned earlier, Lemon Grass Thai Cuisine closed, and Parnell’s Pub vacated one of the two adjacent storefronts it had occupied.

Zagara said he thought the development of other retail centers in the area has hurt Cedar Lee, including the enhancement of the Eton Collection on Chagrin Boulevard in Woodmere, and the renovations that have taken place at Cedar Center in University Heights. “Now we are competing not only for customers,” Zagara said, “but also for employees.”

CLSID is working with the city to try to improve parking in the area. “We want to create a better parking system,” Zagara said. “We want more convenient parking.” He added that people who park in the public lot behind the Cedar Lee Theatre often have to take very long walks to get to the stores and restaurants in the area.

CLSID is also working on a new streetscape plan that it hopes to complete by next year. “We want improved lighting in the area, including LED illumination on the streets and the sidewalks,” Zagara said. “We also want to install pedestrian walkways on the side of the roads to make the area more pedestrian-friendly. And we want to repave the roadways and re-cut the sidewalks.”

FutureHeights, the nonprofit organization that publishes the Heights Observer, is piloting a program with Heights Arts and ARTFUL, another local organization, to install pop-up artists at some of the vacant spaces during special events, such the Heights Music Hop. Deanna Bremer Fisher, executive director of FutureHeights, said that pop-up shops and artists would add vibrancy to the street until permanent tenants could be found.

“Reasons for the closures vary,” said Bremer Fisher. “In some cases, longtime owners decided to retire. Others may not have had a sound business plan from the beginning, and still others may have lost their lease or moved to another location. We have some fantastic restaurants in the Heights, and competition is tough.” She added that, although it may take a while, new businesses and new uses can be found, especially if the property owner is willing to work with potential tenants and make the necessary investments to make the space “retail ready.”

Coryell thinks that the renovation of Heights High, on the northeast side of the Cedar Lee intersection, will have a positive impact on the neighborhood. In particular, he thinks that a new entrance to the high school’s stadium at the corner of Cedar and Lee roads will draw more people into the area.

“When I talk to residents, the overwhelming majority say they love Cleveland Heights,” Coryell said. “And I am bullish about Cedar Lee. I believe it will bounce back.”