Zen and the craft of teaching 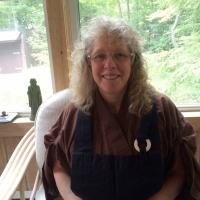 When Susan Rakow was a 19-year-old college student in Buffalo, in 1968, she attended a lecture that changed the direction of her life. Rakow, with hundreds of other students, heard Roshi Philip Kapleau, of the Rochester Zen Center, speak on Zen Buddhism. When he walked onto the stage, she thought, “I want what he has.” She saw a calm strength and equanimity in all he did, and that made a profound impression on her. Rakow had been seeking answers to religious questions and, for the first time, glimpsed an answer. The practice of Zen did not provide a set of beliefs but a way of being in the world.

The Cleveland Zazen Group met in their home until four years ago when the Rakows and some friends purchased a bungalow on Wilton Road, rehabilitated it, and turned the first floor into a Zen meditation center. Rakow is the leader of the group, organizing introductory classes, an annual intensive weekend retreat, and a schedule of meditations on Sunday mornings and Tuesday and Thursday evenings. She thought she was doing something wrong when so few of the people who attended an introductory session returned to the center, but Rakow knows from experience how very difficult it is to work with “monkey mind,” to quiet the chatter and be present in life.

Zen meditation is not for everyone, but it has been a major influence on all aspects of Rakow’s life, including her teaching career, which began at Roxboro Middle School in 1971. She admits she was not a great teacher in the beginning. She struggled to find a way to engage the students in class discussions. One day she was surprised when her students did engage, and she asked why they had suddenly become more vocal. One of the boys replied, “This is the first time you let it happen!”

Most of her teaching career was spent working with gifted middle school children. Not much research had been conducted on this population, so Rakow did research and received a Ph.D. from Kent State University on the subject. She wrote several books about teaching gifted middle school students, and, upon retiring after 30 years, took a new position at Cleveland State University teaching teachers how to work with this population. She also obtained a counseling license and now has a private practice, working mostly with children and parents.

Teaching and caregiving are constant themes in Rakow’s life. Her Jewish upbringing stressed the importance of keeping family connections strong and sacrificing for the sake of family. Doing what you say you are going to do, having integrity and fulfilling commitments are very important to her. As she sees it, education of all kinds, and learning how to live with people who are different from you, are important aspects of life in the 21st century. Seeing “Buddha nature” or the inherent potential for good in everyone, no matter how hard that is to do, is an important practice and value for Rakow.

Rakow has remained true to the example and inspiration of Kapleau, whom she first encountered 47 years ago. She and others have created a unique space for Zen meditation that is accessible to all in Cleveland Heights and beyond. More information about the Cleveland Zazen Group can be found at www.zencleveland.com.

Jan Kious, a resident of Cleveland Heights since 1974, raised four children here with her husband. She is interested in people in the Heights community who fit the description of "living outside of the box."