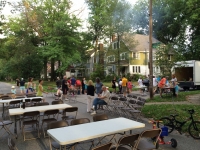 For most of its history, Grant Deming’s Forest Hill Historic District was a neighborhood in search of its own identity. Developed more than a century ago as the Forest Hill Allotment, to evoke images of John D. Rockefeller’s summer estate of the same name, the neighborhood gradually lost its name. Once fully developed, it no longer appeared in newspaper advertisements. Then, after John D. Rockefeller Jr.’s land along the East Cleveland border was laid out as another Forest Hill in the late 1920s, the original Forest Hill neighborhood became a place identified primarily in relation to nearby areas.

With the rise of the Coventry and Cedar Lee commercial districts in the 1920s, residents of Deming’s development began to identify with them. The longtime presence of Coventry School on the neighborhood’s northwest corner caused many to say they lived “in the Coventry neighborhood.” Likewise, religious institutions offered a degree of definition. The neighborhood’s proximity to St. Ann’s Roman Catholic Church, which had its own school, led many to see themselves as living in the St. Ann neighborhood.

The original Forest Hill neighborhood owed its origins to Grant Deming, a real estate developer from Canada. Sensing the eastward push into the Heights, Deming shifted his focus to suburban speculation. In the early 1900s, he acquired almost 200 acres of land owned mainly by John D. Rockefeller Jr. and the heirs of James B. Haycox, a dairy farmer who lived on Lee Road in the vicinity of present-day Zagara’s Marketplace. There, Deming imagined Forest Hill, which his promotional literature, with more than a touch of hyperbole, dubbed "America's Richest Suburb."

Deming thought big. His marketing materials attempted to situate Forest Hill in the company of Boston's Brookline, New York's Llewellyn Park, and Washington D.C.’s Chevy Chase. Like these venerable garden suburbs, Forest Hill would have gently curving streets, setback sidewalks, and a pastoral air. Deming characterized the streets—laid out by the F.A. Pease Engineering Company, the same firm that platted Shaker Heights—as "natural openings through the giants of the forest," but the landscape was more accurately a mosaic of woods and meadows. An exception was the western side of the tract, where two branches of the Dugway Brook meandered through thickly forested ravines in their descent to Lake Erie.

Almost completely built out by the time the Great Depression hit, Forest Hill not only yielded its name to the newer Rockefeller allotment to the north, it also fell on the same hard times that soon curtailed construction in the newer development. Deming’s Forest Hill was largely complete, but its residents faced challenges of their own. Many took in boarders, some of whom likely occupied onetime servants’ quarters. In the early 1930s, the arrival of the first African American family, in a house at Washington Boulevard and Cottage Grove Drive, prompted a bombing before cooler heads prevailed. It would take another four decades for racial integration to make real progress.

The 1960s brought new concerns about racial steering and “blockbusting” real estate brokers, in Forest Hill and across the Heights, leading residents to organize to promote stable and orderly integration. The defeat of the planned Lee Freeway, which would have obliterated Parkway Drive and dozens of homes just west of Lee Road, played a similarly important stabilizing role.

Not until it was listed in the National Register of Historic Places in 2010 did Grant Deming’s Forest Hill reenter the public imagination. Once forgotten, the original allotment developer became the namesake for a new online forum (www.grantdemingneighborhood.org) that cemented, perhaps, the [neighborhood’s] intrinsic identity [for the first time] since Rockefeller stole Deming’s thunder decades before. So well known is Grant Deming today, in fact, that many simply say they live in the Grant Deming Neighborhood, once more obscuring the name Deming chose for his neighborhood. If its name continues to produce confusion, however, the neighborhood today melds an unmistakable sense of place with a socially diverse population.