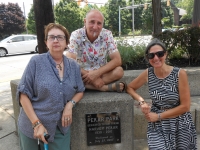 More than 100 people attended the dedication of Pekar Park on Saturday, July 25. The newly named park—previously the Coventry Outdoor Courtyard—is at the intersection of Coventry Road and Euclid Heights Boulevard, near the Grog Shop and the Inn on Coventry.

Harvey Pekar, well-known author, music critic and media personality, lived in Cleveland Heights for many years, until his death in 2010. He frequently hung out on Coventry, and loved the neighborhood.

Pekar is probably best known for his graphic novels, including the autobiographical American Splendor, which was released as a film in 2003; it starred Paul Giamatti as Pekar and Hope Davis as his wife, Joyce Brabner.

Brabner worked with the City of Cleveland Heights and the Coventry Village Special Improvement District (CVSID) to get the park re-named. “My purpose was to bring this corner back to the kids,” she said. “I saw an opportunity to return the corner to a youth- and arts-friendly state.”

Harvey Pekar banners, commissioned by Brabner, and illustrated by Joseph Remnant, now hang on lampposts in front of the park, and a sign engraved with Pekar’s name is mounted on one of the stone walls near the edge of the park. Three large planters were removed from the sidewalks, to open up the space. “I wanted to roll back this courtyard to a golden era when people hung out here and read books and played music,” Brabner said. “Harvey always hung out here and practiced his stories here.”

The ceremony featured comments from Brabner; Suzanne DeGaetano, owner of Mac’s Backs bookstore; Steve Presser, owner of Big Fun toy store; and others. Cleveland Heights Mayor Dennis Wilcox said, “This is a special and unique area, and it’s appropriate to honor a person who was special and unique. I’m proud that Harvey was part of our community.”

After the dedication ceremony, the Heights Jazz Group performed. Later, several people—including Cleveland-based cartoonist Derf; Carol Wallencheck, a librarian at the Lee Road Library; and Cindy Barber, owner of the Beachland Ballroom—told stories about Pekar. The evening ended with a showing of “American Splendor” at the Coventry P.E.A.C.E. Park.

Most longtime Coventry merchants remember Pekar from his frequent visits. “Harvey always sold me his American Splendor comics,” DeGaetano said. “So when I needed some, I’d call him, and he’d bring them by and sign them. This was his commercial district, and it was one of the only bohemian neighborhoods in Cleveland at the time.”

Presser recalled, “He would frequent all of the places on Coventry, and he was quite the character. He was like a Renaissance man. He supported the arts, and I really respected him.”

At one point in their relationship, Pekar told Presser he wanted to do a graphic novel about Big Fun and Dottie’s Diner, which Presser also owned. The diner, located on Lee Road in the space now occupied by the Katz Club, was about to go out of business, and Presser was trying to save it. “We had breakfast together many times at Tommy’s,” Presser said. “It was an incredible experience.” The book, called Huntington, West Virginia: “On the Fly,” came out in 2011. The section about Presser is called “Neighborhood Spark Plug.”

Tommy Fello, who owns Tommy’s restaurant, said Pekar was a regular: “He came into Tommy’s a lot. Sometimes he would argue with other customers about politics and other subjects. He would always order a plain falafel sandwich with a chocolate malt. And he was really into jazz and old records. If you gave him a good 78-rpm record, he’d be in heaven.”

Rob Pryor, the general manager of Record Revolution, said of Pekar, “He bought a lot of records here. He really liked jazz, and he found joy in the activity of looking at records and buying records.”

“Overall, the day was a huge success,” said Angela Hetrick, CVSID executive director. “And it was an honor to dedicate this space to Harvey. We hope that future Harveys will find it to be a warm and comforting space.”