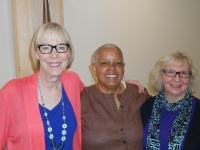 The SGI-USA Buddhist Center is set to open at 2255 Lee Road on Aug. 9, in a portion of the space previously occupied by Petland, which vacated the space about six years ago.

SGI-USA is part of a worldwide Buddhist organization called Soka-Gakkai International, which has more than 500 chapters and 100 centers throughout the United States, and more than 12 million members in 192 countries and territories around the world. SGI has about 650 members in northern Ohio, from Toledo to western Pennsylvania. Based on core Buddhist principles, such as respecting the dignity of human life and the interconnectedness of self and the environment, SGI focuses on various peace activities, including human-rights education, abolishing nuclear weapons and efforts to promote sustainable development.

“Buddhism became very popular in the 1960s and ‘70s,” said Barb Jenkins, vice-national women’s leader of SGI-USA. “It helps bring out the positive aspects and the strengths and power of your life, particularly in the midst of adversity.” Jenkins, 61, lives in Chagrin Falls. She spent much of the 1970s and ‘80s in Cleveland Heights, and said, “It’s still my stomping ground.”

Jenkins said that the organization looked at more than 100 locations before selecting the Lee Road space. “We looked everywhere,” she said. “And we are so excited about what we have here: the diversity of the community, all of the things on the street, including restaurants and shops. And the people are so wonderful.”

The center is planning a community open house on Aug. 15 and 16. The center’s many free programs and activities will be open to both SGI members and non-members. On the first Sunday of every month, it will hold world-peace prayer sessions, starting at 10 a.m. Also once a month, on Thursdays, it will conduct introductory meetings, beginning at 7 p.m. It will also host discussions about various Buddhist topics, and present speakers. In addition, SGI plans to put together exhibits in the space, and host book-club meetings and youth activities. The center will have four chanting rooms, lobby areas in the front and the back of the space, and a bookstore, which will carry Buddhist-related books and materials.

Anne Perusek, SGI’s women’s division member-care advisor, said, “To become a member, a person commits to make a sincere effort at Buddhist practice—which includes learning to chant, studying Buddhism, setting up a Buddhist altar in one's home, and participating in monthly discussion meetings when possible. As a custom, new members offer $50 when joining.”

Perusek, 60, a longtime Cleveland Heights resident, described SGI as “significantly different from other Buddhist organizations.” She said most of them have priests and temples, but SGI focuses on “individual daily practice.” According to Perusek, “Consistent practice can bring a wellspring of hope. It brings out the hopeful aspects of life.”

Bibi Potts, SGI’s women’s division chapter leader for the Heights, University Circle, East Cleveland and Mount Pleasant, said that SGI “offers the opportunity of diversity of thoughts and opinions to be considered before we make any decisions.” Potts, 63, has lived in Cleveland Heights for the past 30 years.