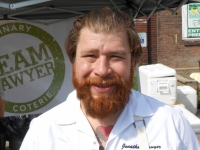 Jonathon Sawyer, winner of the 2015 James Beard Award for Best Chef in the Great Lakes Region.

Cleveland Heights resident Jonathon Sawyer has won the 2015 James Beard Award for Best Chef in the Great Lakes Region (Ill., Ind., Mich. and Ohio). Sawyer won for his work at his restaurant The Greenhouse Tavern, on East Fourth Street in downtown Cleveland.

The James Beard Foundation awards are considered the Oscars of the food world. They comprise scores of categories—from food writing and broadcasting to awards for restaurant design and best chefs in 10 regions.

Sawyer said he was honored to win. “It was really nice to have your mentors and peers validate you and tell you that you are doing the right thing and headed down the right path,” Sawyer said.

The award ceremony took place on May 4 at the Civic Opera House in Chicago, and Sawyer attended with his wife, Amelia, and 10 members of the Greenhouse staff. All of the other finalists in the Best Chef Great Lakes category were from the Chicago area.

Michael Symon, another Cleveland Heights resident, is the only other Greater Cleveland chef to have won the James Beard Best Chef Great Lakes Region award. He won in 2009.

Sawyer and his family moved to Cleveland Heights from Shaker Heights in 2012. Initially, they lived on Kenilworth Road, then moved to Demington Drive last July.

Sawyer, 35, got his first taste of the restaurant business when he was 13 and started working at a restaurant called Mad Cactus in Strongsville. He later worked at Symon’s Lolita restaurant in Tremont. In 2007, Sawyer and Sam McNulty opened Bar Cento on West 25th Street in Ohio City, and the following year, Sawyer opened the Greenhouse Tavern.

The restaurant’s menu is patterned after a French bistro, and most of the food comes from within 50 miles of Cleveland. Virtually everything in the restaurant is made from recycled materials, and it was the first restaurant certified green in Ohio. Sawyer plans to start serving brunch at the Greenhouse this summer.

Sawyer is also looking to expand his business outside of Cleveland and is currently considering possible locations in Columbus, with an eye to opening a restaurant there sometime this winter.

Sawyer is also the author of a new book, published in February, called Noodle Kids: Around the World in 50 Fun, Healthy, Creative Recipes the Whole Family Can Cook Together. According to Sawyer, the book encourages families to cook and eat healthy food together. He and his wife have two children, Catcher and Louisiana.

Commenting on the book, Michael Symon stated, “The thing I have always loved about Jon is that everything he does is filled with passion, love, creativity and fun. He approaches cooking like this, as well as his family, and it shines through in the way he and Amelia raise their wonderful kids. This book is not only a recipe book for families, but a story into how their travels and love have shaped their family.”

The book is available at most bookstores, including Mac’s Backs on Coventry, which hosted a book event with Sawyer in early May.