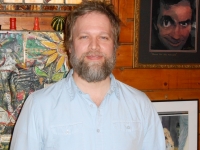 Cleveland Heights resident Brent Kirby has been playing music since he was three years old. Now 43, Kirby is a full-time musician. Over the years, he has played in several bands, including the Jack Fords, the New Soft Shoe, the Lost Fortunes, the Flashing 12’s and Hey Mavis. And he recently formed a new group called His Luck.

His father was a composer, and his family had a piano in their house. As a young child, Kirby played the piano and drums. By the time he was a teenager, he was a pretty accomplished pianist, and he began writing songs. His first song was about his grandfather, who had recently died. When he was 14 years old, he joined his first band and started playing in bars.

Kirby grew up in a small town called Oconomowoc, in Wisconsin. He attended the University of Wisconsin at Oshkosh and received a bachelor’s degree, with majors in recording engineering and music merchandising and a minor in business. After graduation, he moved to St. Louis, where he had an internship at a recording studio and managed a vintage guitar store.  A few years later, he moved to Nashville and began playing with the band Mavis. He also started working for Sam Ash Music, a musical-instrument retail store, and, after two years, relocated to Chicago, where he helped run a Sam Ash store.

In 2001, Kirby was named general manager of Sam Ash and transferred to Cleveland. He became more and more involved with the local music scene and, in 2003, he released his first solo album, The Mean Days. He recorded the album with his group, the Flashing 12’s.

Kirby decided to leave Sam Ash in 2004, to focus on his music full time. The following year, he formed the Jack Fords, and the group began playing regular gigs at a club called the Town Fryer, which was located at East 39th Street and Superior Avenue. In 2005 and 2007, the Cleveland Free Times named the Jack Fords Cleveland’s best rock band. The group has released three albums, including There It Is, which just came out on March 6.

In 2009, Kirby formed another band, the Lost Fortunes, which played more Americana-style songs. That band released an album called Last Song on the Soundtrack. Two years later, Kirby formed the New Soft Shoe, a group devoted to the music of Gram Parsons, one of the fathers of country rock, who performed with the Byrds and the Flying Burrito Brothers. That band plays at the Happy Dog restaurant and bar, located at West 58th Street and Detroit Avenue, on the second Thursday of every month.

Kirby’s latest album, Patience Worth, will be released on May 16. He recorded the album with his new band, His Luck, and a CD release party will take place at the Music Box Supper Club, the new music venue located on the west bank of the Flats. The album was recorded at a friend’s house in Willoughby Hills. Kirby produced the CD, which features a wide array of styles, from punk to folk. The album also features horn sections, back-up singers, string sections and a variety of musical sounds.

“I’m happy that I can play whatever style of music I want to play,” Kirby said. “I am also happy that I have reached a point in my life where I am not worried about trying to be big. I write songs that mean something to me and that people can relate to. I feel much more spiritual about my music.”

Kirby, who is divorced, is the father of a six-year-old daughter named Mira. He moved to Cleveland Heights about a year ago, and lives on Grandview Avenue. He loves the area. “I like the fact that all of the houses are unique and different,” he said. “I also love the diversity of the city, and I like the restaurants. I love the Inn on Coventry and Tommy’s. And I like the fact that we are so close to the Shaker Lakes and that it is a walking city.”

In addition to his CD release party at the Music Box, Kirby has several other gigs coming up this month. The Jack Fords will be playing at Brothers Lounge, at West 117th Street and Detroit Avenue, on May 9, and the New Soft Shoe will play at Happy Dog at the Euclid Tavern on May 14. In addition, Kirby hosts a songwriter’s showcase every week at Brothers Lounge. Called “10 x 3,” the shows feature 10 singer-songwriters, each of whom performs three songs, including two original compositions.

Over the years, Kirby has received numerous awards. In 2012, Scene magazine named him Cleveland’s best musician, and in 2013, the Scene named him best singer and best male vocalist.