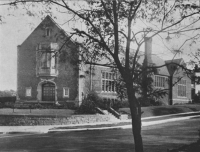 Harry Potter and his friends would feel right at home in the Coventry Village Library, a brick Tudor Revival- and Jacobean-style building that sits on a grassy slope at the corner of Coventry Road and Euclid Heights Boulevard. Designated a Cleveland Heights Landmark in 1980, the building features many historical details, including a large fireplace, Arts and Crafts tilework, and medieval-style light fixtures.

Designed by John H. Graham & Co., Architects, who had drawn plans for Fairmount Presbyterian Church and three buildings for the Laurel School nearly a decade before, the Coventry Village Library opened as the main library for Cleveland Heights in 1926. Built on land originally platted as part of Grant W. Deming's Forest Hill residential allotment, the library, along with Coventry School, were the only nonresidential structures in Deming's development.

In 1961, the Cleveland Heights-University Heights Public Library system boasted the second highest book circulation for a city its size in the United States. The growth of the two adjacent suburbs strained the library's ability to serve public needs, so, in 1968, the library board opened a large new main library on Lee Road, demoting Coventry to branch status. The library languished after the Lee Road Library opened, and fell into disrepair.

A new chapter in the library's history began with the building's sale in 1974 to the Fairmount Center for Creative and Performing Arts, a nonprofit arts organization formed four years earlier in Novelty, Ohio. The Fairmount Center hoped to extend its reach to a larger population and used the library to provide fine arts services to the CH-UH and East Cleveland school systems, and run dance programs for Cuyahoga Community College and Lake Erie College. The center leased two main-floor rooms back to the library, so it remained open.

Residents expressed growing dissatisfaction as library hours and services were cut. After failing to secure a long-term lease, concerned citizens, rallied by Shirley Hyatt, gathered more than 2,000 signatures on a petition in 1979 to get the library to buy back its building.

The library board, however, saw the building as decrepit and hoped to obtain federal Community Development Block Grant (CDBG) funding through the city to open a larger library in developer Lewis Zipkin's CoventrYard development across Euclid Heights Boulevard.

Two factors—CH City Council's refusal to allocate CDBG monies to the library, and the Fairmount Center's worsening financial woes—combined to persuade the board to repurchase Coventry library in 1980. That same year the library gained city landmark status.

After an extensive renovation in 1981, Coventry Village Library reopened, and its role as a center for fine arts continued. The Pottery Cooperative of the Heights Guild of Artists and Artisans (later renamed Clayworks) continues to serve as a pottery-making center. The library has continued its longtime role as a community center, offering musical and theatrical performances (including those for the deaf), poetry readings, and hosting community meetings and public lectures.