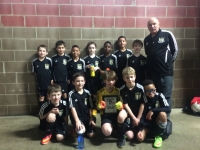 Competing in the National Indoor Soccer Championship Feb. 27 through March 1, in North Olmsted, the Eastside Kickers (ESK) U9 team had a fantastic run and finished in second place.

The all-boys team has 12 members, nine years old and younger, who live in Cleveland Heights (10 players), University Heights (one player) and South Euclid (one player).

Playing against top club teams, including teams from West Virginia and Illinois, the ESK boys finished first among the U9 teams in the group stage, with a 3-0 record. They eventually lost 3-6 in the finals, to the Juniors FC team from Chicago.

“It is absolutely remarkable that our local boys made it in the finals of this prestigious tournament,” said Paul Eyre, who is the ESK U9 coach, as well as the Heights High Girls’ Varsity Soccer coach. “Their accomplishment highlights the quality of soccer being played by the grade school boys and girls in Cleveland Heights. We are so proud of all of our teams and the 250 youngsters in the ESK soccer family.”

Diane Roberto is a Cleveland Heights resident and an ESK soccer mom. She's a graphic designer and on the design team of the Heights Observer.