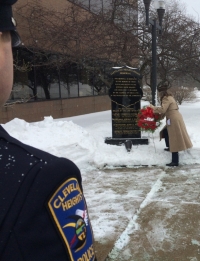 Nancy Disbro, of the Citizen Police Academy Alumni Association, lays a wreath at the Feb. 21 End of Watch ceremony honoring Patrolman Norman C. Reker, who was shot in the line of duty in 1948.

The ceremony will last about 20 minutes and is open to the public. It is being held by the Citizen Police Academy Alumni Association in conjunction with the CHPD.

Patton suffered a fatal heart attack while chasing an assault suspect on March 13, 2010 in the area of Coventry and Mayfield roads. He had been a member of the force for nine years.

Patton is one of four Cleveland Heights police officers who have died in the line of duty. The others are:

As part of its public service mission to the community and the police department, the newly formed Citizen Police Academy Alumni Association has begun organizing End of Watch ceremonies on the anniversary of each fallen officer's death. The first such ceremony was held last month in Reker's memory.

Cleveland Heights resident Bob Rosenbaum is co-chairman of the Heights Observer, and is responsible for its advertising sales and market development.