Rick Szekelyi invites you to play 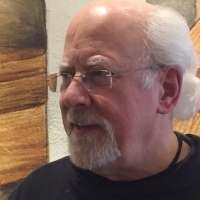 There’s something very special happening Sunday afternoons at Stone Oven Bakery on Lee Road. Musicians from near and far come together for an open mic presented by Rick Szekelyi. Each plays three pieces for an audience of faithful listeners, other musicians, and those who just stop in for the daily soup or a sweet afternoon treat.

Szekelyi, a twinkle-eyed 60-something, is an operational and financial management consultant for companies experiencing difficulties. His father, an accountant like himself, was a professional musician who bought him his first guitar at age 8. Szekelyi taught guitar in high school and college, and played in bands throughout, but while raising a family played only occasionally for himself. He recently picked up his guitar after a hiatus of several decades and began writing songs again.

Last summer, he attended a Steve Earle workshop near Woodstock, N.Y., and for the first time ever performed in public at an open mic. “It went okay and I didn’t die,” he reported. “I liked it.” (He does say that he meditated for half an hour before he went on stage, probably at the advice of his wife, Colleen, a yoga teacher.) Szekelyi began attending open mics in Northeast Ohio and meeting other musicians.

After he didn’t die playing in public, Szekelyi began to look for a Sunday afternoon open mic venue with no big-screen sports events on the wall. One day eating at the Stone Oven, he asked owner John Emerman, whom he had never before met, if he would host an open mic. Who knew that Emerman is a closet musician, who has played sax, flute and classical guitar? You won’t see him perform, as he suffers from stage fright, but he was happy to host others.

There are some regulars at the open mic, driving in from Mentor, North Ridgeville, Bay Village, Concord, North Olmsted, or from Heights neighborhoods. Most are singer-songwriters who play guitar, but other genres are welcome and include poetry, jazz and classical music. Herschel Winters, a student who serves at Anatolia Cafe across the street, has played classical violin accompanied by an orchestral background track on a CD. One performer sang a Russian folk song a cappella.

“People who come here tend to be really good listeners who like the diversity,” said Szekelyi. “A number of artists have commented on it.” And there are often people who are playing in public for the very first time who, like Szekelyi, didn’t die from it. (Perhaps someday John Emerman will be one of them!)

Szekelyi himself writes one or two songs a month. He recently wrote “That Old House,” after walking past a house being demolished, and thinking of all the families that had lived there.

Many of the singer-songwriters have day jobs and also regularly play solo or in bands, for pay. Why do they play for free at an open mic? “They really want to share what they write,” explained Szekelyi. “As someone said: a song’s not finished until you play it for someone. And it’s nice there’s places you can go where there’s community.” He believes that what is important for most isn’t applause, but “what’s happening while you’re playing the song.”

The Stone Oven Bakery open mic is an accepting venue for experienced and novice performers of any age. As the day ends, the street through the windows behind the performers darkens, twinkling lights appear from Anatolia Cafe across the street, and the inside becomes even more intimate and warm. Szekelyi invites you to bring your music and poetry of any genre to share, promising you a warm welcome.

Open mics in the Heights area include:

For information on other open mics throughout Northeast Ohio, check out www.neopenmic.com, a website maintained by Charlie Mosbrook.