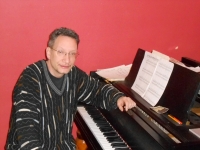 Joe Hunter at his house in Cleveland Heights.

Joe Hunter is one of Cleveland’s most highly regarded jazz pianists. A Cleveland Heights native, he began playing piano when he was eight years old, and now plays several shows every week around Northeast Ohio.

Hunter, who will be 55 this April, said there was always music around his house when he was growing up. “My parents were big music lovers,” he said. “They hired piano players when they had parties, and they had a wonderful record collection that included music by Ray Charles, Bob Dylan, the Weavers, Miles Davis, Duke Ellington and many, many others.”

His mother, Sara Hunter, was a municipal judge in Cleveland Heights for 18 years, and was the first female judge in the city. She also played accordion. His father, also named Joe Hunter, was the regional director of the Ohio Civil Rights Commission, and he played washtub bass.

Hunter said his musical skills really broadened while he was attending Heights High, where he was a member of the school’s jazz ensemble and orchestra. He and his friends also formed a band called Zhandro while they were in high school.

In addition to playing piano, Hunter also played blues harmonica and bass while he was in school. Meanwhile, he began seeing concerts by many music legends. His parents took him to the Theatrical Grill, which used to be on what was then called Short Vincent Avenue, in downtown Cleveland. That club presented shows by such legendary artists as Judy Garland, Dean Martin and many others. Hunter and his friends would also hang out at the Boarding House, another jazz club, which was on Euclid Avenue near University Circle.

After high school, Hunter attended Cleveland State University, where he studied classical music. “I had a lot of wonderful teachers,” he said. “And I had a great classical-music piano teacher.” During his time at CSU, the university started an exchange program with a college in Brazil, and, in 1982, Hunter became the first CSU student to spend a semester at a college in Rio de Janeiro. “It really got me interested in Brazilian music,” he said.

During the 1980s, Hunter played piano in a rock band, Nation of One. “I was hoping I could make a lot of money in rock, so I could support my jazz addiction,” he said, laughing.

Hunter did not graduate from CSU. Instead, he started playing music full time. In 1987, he moved to Columbus, and five years later, he got a job teaching jazz piano at Capital University. He spent five years there, then, in 1997, returned to Cleveland Heights and started teaching piano in the jazz program at Cuyahoga Community College.

Over the course of his career, Hunter has released three albums. His latest is called Sweet and Lovely, and it features Hunter on piano, Roy Davis on drums, Demetrious Steinmetz on bass, as well as a string section that includes violins, viola and cello.

Hunter regularly plays shows in and around Cleveland. Every Friday night, he plays at the Waterbury Coach House in Lakewood, and every Sunday he appears at Salmon Dave’s restaurant in Rocky River. He plays frequent shows at Nighttown in Cleveland Heights, the Music Box in the Flats, and Blu, a new club in Akron. On March 21, Hunter will take part at an event at the Ohio Theater in Playhouse Square called Swing’s the Thing.

“I have really gotten inspiration from Nat King Cole, Oscar Peterson and so many of the other great, straight-ahead jazz piano players,” said Hunter. “And I am very, very fortunate to have been able to maintain a life in music.”