Area Cubans hope change will come to their native land 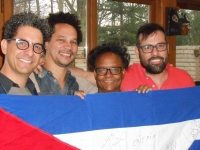 This past December, President Barack Obama and Cuban President Raúl Castro announced that the United States and Cuba were beginning the process of normalizing relations between the two countries. The plan is to lift some of the travel restrictions, allow more U.S. companies to do business in Cuba and open a U.S. embassy in Cuba. The small group of Cuban immigrants in the Heights area is somewhat optimistic about the changes that may result from these negotiations.

Raudel Napoles, who lives on North Park Boulevard in Cleveland Heights, said, “I think it’s a step in the right direction to establish relations. Right now, you never see anything from the U.S. in Cuba.” Napoles, who’s 37 years old, left Cuba in 2004 and moved to Wyoming before coming to Cleveland in 2005. He’s a Pilates instructor at White Cloud Studios on Fairmount Boulevard.

David Alvarez-Carbonell, who’s 43 years old and a scientist at the Case School of Medicine, added, “I’m very happy that Obama has made this decision. But the civilized countries of the world must demand that the Cuban government give their people more freedom.” Alvarez-Carbonell left Cuba in 1993 and moved to Canada before coming to the U.S. in 2003. He moved to Cleveland in 2011.

All three of the Cuban immigrants, as well as Eldis Rodriguez, a 44-year-old artist who lives in Cleveland Heights, said that conditions in their native country are absolutely horrible. “If you are a Cuban, just about everything is illegal,” Rodriguez said. “And there’s no food, no transportation, no nothing.”

They noted that conditions got even worse after the Soviet Union ended its control of Cuba in 1989. “After the Soviets left, the country went into a deep recession,” Knight said, “There was no food, no jobs, no electricity. It’s dark and dirty there, and there’s garbage all over the place. They keep cracking down on freedoms. I wish my relatives there had a food supply, but they barely do.”

Those conditions were what prompted all four to leave Cuba and come to the U.S. “We are all freedom seekers,” Alvarez-Carbonell said. “That’s why we came to the U.S. We were very restricted in Cuba. We lacked opportunities to do what we wanted to do.”

They estimated that there is little more than a handful of Cuban immigrants in the Heights, and only about 100 in Greater Cleveland. Among them is a musician who plays with the Cleveland Orchestra, as well as doctors, and professors at Kent State University, the University of Akron and Case Western Reserve University.

While they are happy that President Obama is trying to improve relations with Cuba, these Heights-area residents are concerned that it might not be enough to improve conditions in their native country. “I’m very hopeful, but my expectations are very low,” Napoles said. “The U.S. cannot come to Cuba and change the social situation. Economically, they can make some changes, but much more is needed.”

“I believe Obama has good intentions,” Rodriguez added. “But it’s hard to believe that the Communist government in Cuba is going to bring about the many freedoms that are needed down there.”