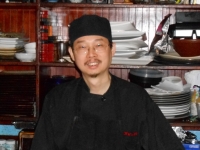 Pacific East, the Japanese restaurant located at the north end of Coventry Road near Mayfield Road, has expanded. Last month, the restaurant took over the space previously occupied by Talmer Bank and Trust, which closed its Coventry branch last fall.

“We just didn’t have enough space,” said Freeman Ngo, who owns Pacific East with his wife, Susan. “There were always people waiting in line to get tables, and we couldn’t seat large groups.” With the new space, the restaurant can now seat about 100 people, while previously it could only seat about 70. This is the restaurant's second expansion; a couple of years ago, the owners took over the adjacent space on Coventry Road.

Ngo, who’s 45 years old, was born in Malaysia. He and his family moved to New York City about 29 years ago. Then, in 1999, he moved to Cleveland. His wife’s cousin owned Hissho Sushi, which operates sushi bars at Heinen’s and Market District grocery stores, and Ngo started working for that company. In 2002, he decided to open Pacific East. “I always wanted to have my own restaurant, and we finally found the space,” he said.

The restaurant has won numerous awards over the years, including Cleveland magazine’s Silver Spoon award. It is also regularly included on the Plain Dealer’s A-List of best restaurants, and both Scene magazine and Northern Ohio Live have given it numerous best-restaurant awards.

According to Ngo, Pacific East’s sushi selection is the largest in this part of Ohio, and it’s the only restaurant in the state that offers Malaysian foods. “We’re the only restaurant in this region that serves bluefin tuna,” Ngo said. “We also serve yellowfin and big-eye tuna.” He added that the Malaysian food blends different cultures, such as Chinese, Indian and Thai, which makes it special, and that the restaurant only uses premium, short-grain rice and pure rice vinegar, which is imported from Japan.

Pacific East also serves some live items, including scallops, clams and sea urchins. “We only use the highest-quality foods,” Ngo said. “Some of the products come from the Cleveland area, and our main supplier is an Indonesian company called True World, which has its U.S. headquarters in New Jersey.”

The restaurant was so successful that, seven years ago, Ngo and his wife opened a second Pacific East at the Eton Collection on Chagrin Boulevard in Woodmere.

The family lives in Mayfield Heights, and Ngo and his wife have two children, Norman, who’s 14 years old, and Heidi, 12. “Norman is on his school’s soccer team, and he plays trombone in the band,” Ngo said. “Heidi loves to ice skate.”

Meanwhile, Ngo is very excited about the expansion. “We really needed to be able to accommodate more people,” he said. “And now we can.”