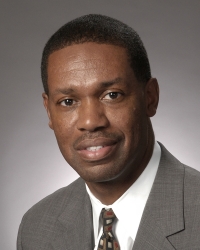 Longtime Cleveland Heights resident Anthony E. "Tony" Smith, known for his involvement in the Heights community and his ownership of Cleveland-area Popeye's franchises, died in his Cleveland Heights home on Nov. 29, at age 53.

“I have seen Tony’s generosity and kindness. He was a great advocate and supporter of the CH-UH schools,” said Katura Simmons, CH-UH PTA president. “Many times we called on Tony to help us out in a pinch with a school or community event and, without hesitation, he would come through, often going above and beyond to make sure that we had a great event.”

While Smith was a great supporter of school and community volunteers, he also contributed in many official ways to the CH-UH City School District.

“Tony’s contributions to the district were invaluable,” said Ron Register, CH-UH Board of Education president. “His work on school levies and in supporting individual students showed the highest commitment that a man can make in his life. We love you Tony and will miss you.”

Smith was a member of Fairmount Presbyterian Church in Cleveland Heights, an active member of the 100 Black Men of Greater Cleveland and a trustee emeritus of the Great Lakes Science Center.

Donations via credit card can be made through the Cleveland Foundation's website, www.clevelandfoundation.org.

Carla Bailey is the Heights High PTA president and a volunteer with the AFS Foreign Exchange Student Program.