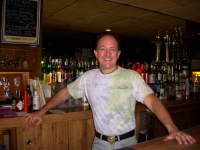 Pete Harris at his bar in 2008. [photo by David Wasserstrom]

Pete Harris, owner of Pete’s Tavern at 1318 Warrensville Center Road, lost his battle with cancer on Dec. 6. Peter G. Harris was born in South Euclid, grew up in Cleveland Heights and attended Noble Elementary School and Monticello Junior High School. He graduated from Cleveland Heights High School in 1975 and The Ohio State University in 1979.

He patronized the Cleveland Orchestra and was a member of the Cleveland Museum of Art. He had a tender spot for animals, and supported the Animal Protective League and adopted rescued dogs.

Harris worked at the former Turkey Ridge Tavern on Coventry Road and at Bob’s on Mayfield Road before he bought his bar, the former Faragher’s, with his father in 1997. The deal included his father’s requirement that his son stop drinking. Harris was sober for 15 years, which drew comparisons between him and Sam Malone, the sobered bar owner of the TV show "Cheers."

Tom Owens, a longtime friend and patron, recalled, “I met him in ninth grade when several of us were playing King of the Hill on a snow pile. He was relentless and a lot of fun. That’s how he was later in life, too. When I was in the hospital he came all the way to Southwest General to visit me a few times. He visited me again when I was in rehab at McGregor. He was the perfect bar owner.”

Allen Moore reminisced, “The first time I walked into Pete’s it had a very relaxing atmosphere. It’s a great place to bring people if you just want to see people and have a beer."

Stephanie Combes, bartender and cook for six years, will continue the business as Pete’s Tavern. “People call us Cheers all the time,” she said, referring to the neighborhood bar feel as well as Harris’ sobriety. “This year, the annual Christmas party on Dec. 19 will also double as Pete’s wake. Musicians who performed live at the tavern in the past are promising to come back to jam that evening. Patrons are invited to bring a potluck dish to share.”

“The bar is nice, easy—a neighborhood bar,” said Owen. “He would do anything for anybody.”

“The toy train on the corner of the bar was the last thing he bought for the bar,” said Moore. “Yeah, Pete was Pete.”

Harris leaves behind his sister, Polly Harris (Michael Tracy), of Westerville, Ohio; his nephew, Alexander Harris Tracy (Kristen) of Columbus, Ohio; his two dogs, Red and Mitch; and many devoted friends and patrons of Pete's Tavern. Services will be private. Donations in his memory may be directed to the American Cancer Society (http://www.cancer.org) or the Cleveland Animal Protective League (https://clevelandapl.org).

[Editor's note: Pete's Tavern closed abruptly on Dec. 31. At press time, no information was available as to if or when the bar would reopen.]

Brenda H. May is one of the Noble Neighbor leaders. She has lived in the Noble area for 30 years. Contact her at nobleneighbors@gmail.com.