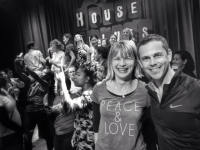 Jen Margolis and Scott Simon, the founders of Thrive, at the organization's Lunch Beat event at the House of Blues in October. Photo courtesy Thrive Cleveland.

Thrive, a relatively new Cleveland organization, has one goal: to make people happier. Called a happiness incubator, Thrive was formed in January of 2012 by Jen Margolis, a Cleveland Heights resident, and Scott Simon, who lives in Pepper Pike.

“We wanted to design experiences, habits and spaces that increase happiness, both at work and at home,” said Margolis, who is 37 and lives on Wilton Road.

Thrive came about after Simon spent time with what’s called a “positive psychologist.” “Psychology as a whole looked at what’s wrong,” Margolis said. “Then Martin Seligman, a psychologist at the University of Pennsylvania, flipped that. He thought it made more sense to see what’s working well and build from there.”

Another noted psychologist, Tal Ben-Shahur, also focused on happiness. While a professor at Harvard, Ben-Shahur taught classes about positive psychology and the psychology of leadership. Those two classes are among the most popular courses ever at the university. He went on to form the Wholebeing Institute. Wholebeing is a synthesis of two words: whole person and well-being. The institute believes that to lead a full and fulfilling life, to enjoy a deep and lasting sense of well-being, it is necessary to embrace the whole self.

Thrive’s first event was called WTF, or What Tha Food. “It was a farm-to-table experience that had people taste the difference between local food and processed, nationally distributed food,” Margolis said. The people who took part in the program were placed on different teams and took buses to meet and talk to local farmers and taste local food. Then a chef prepared dishes from the food the participants had selected. “We had three goals,” Margolis said. “We wanted to create new connections between people. We wanted them to have a highly sensory experience, and we wanted them to experience the beauty of our region.”

Since then, Thrive has expanded its programming. It now includes Thrive at Work, which takes happiness programs into different businesses and corporate headquarters. A recent Gallup Poll survey found that 70 percent of U.S. workers did not enjoy their work. “We wanted to create a program that connects people with work that matters to them,” Margolis said. Microsoft, Progressive Insurance, Smucker's and the Weatherhead School of Management are all taking part in this program.

In October, the organization started the Thrive Box. Each box contains various items that are intended to induce a sense of happiness and well-being. The boxes cost $39 and are available on Thrive’s website, www.thrive-box.com. “Our idea was to change gifting,” Margolis said. “Instead of going out and buying the usual kind of gift for someone, now you can get this box -- a happiness experience in a box, packed with six happiness practices that together create an experience, because it’s experiences that make us happy, not stuff.”

Thrive has also partnered with the Phoenix Coffee store on Lee Road to create what they are calling a “curiosity wall.”  People can write something on the wall that they are curious about. Then other patrons can vote by putting stickers next to the comment that interests them the most. Once an item gets five stickers, it’s activated. The Thrive team chooses three activated cards and curates images and text-based responses that are displayed next to chalk boards where the community can respond as well.

Thrive also has a program called Lunch Beat. In October, it was held at the House of Blues in downtown Cleveland, and guests could dance to the music provided by a deejay, eat healthy food and then head back to work. The organization is also planning a Pop-Up Wedding, which will be an actual wedding for a couple who were planning on eloping.

Thrive is the only organization of its kind in the United States, and it has also succeeded in making Margolis and Simon very happy. “All of us are thrilled with the success of the organization,” Margolis said. “It’s been an incredibly organic evolution. It amazes me to think that this was all just an idea a couple years ago, and now we are starting to make a real impact not only in the community but in workplaces and through this beautiful gift box. I honestly can’t believe this is my job! I’m happiest when I feel I’m making a positive contribution in the lives of others, and so yes, Thrive makes me very happy!”