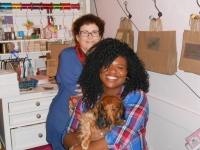 Elisabeth Gevelber, the owner of Simply Charming on Lee Road in Cleveland Heights, likes to say that her store features “baubles, bijoux and bibelots.”

That’s trinkets, jewelry and treasures. If you look around the store, you’ll see that’s a pretty accurate description.

The store originally opened in 2007 on Lee Road, in the space now occupied by the Shawn Paul Salon. Two years later, it closed. “We were going to move to Arizona,” Gevelber said. “It was because my son, Matthew, wanted to be able to play baseball year round. But then he broke his leg playing soccer, so we didn’t move after all.”

In 2011, she re-opened on Warrensville Center Road near Silsby Road. Less than a year later, Gevelber moved the store to its current location at 2254 Lee Road, just south of Meadowbrook Boulevard.

She graduated from Beachwood High and then went to Boston University, where she majored in business administration. After graduating in 1982, Gevelber moved to San Francisco, where she opened a men’s clothing store. Four years later, she closed the store and decided to move back to Cleveland. She worked at Saks Fifth Avenue in Beachwood Place for about a year, and in 1990, she got married.

She spent the next years raising her son. Then, in 2003, she opened a tearoom called La Tea Da in Rocky River. After a few years, she came up with the idea for Simply Charming. “I didn’t think there was anything else like it in this area. And I liked the idea of carrying a lot of unique items.”

One of the store’s best-selling items is a series of socks that feature irreverent and silly words on them. One pair says, “The three things I hate most are math,” and another, “I have vague feelings about whatever . . . .”

Simply Charming also stocks soy candles that are made in Tennessee but are named for neighborhoods and organizations in Cleveland Heights. One candle is called the Cedar-Lee, another FutureHeights and another Heights Arts. The store also carries cute items for babies and young children.

One of Gevelber’s more recent additions to the store is a line of jewelry made by the company Alex and Ani. “They are sort of like charm bracelets,” she said. “But they tell something about you.”

Gevelber, who lives in University Heights, is a big supporter of area organizations. Her store was a sponsor of the recent Heights Music Hop. “I absolutely love supporting the community,” she said, “and the people who come in here are awesome.”

If you do visit the store, there’s a good chance you will see her dog, Clementine, a seven-year-old long-haired dachshund who likes to run around and say hello to the customers.

Closed on Sunday and Monday