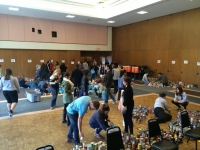 Northeast Ohioans have certain expectations for the coming of autumn. They anticipate great piles of leaves, chilly temperatures, and shorter days. In addition to these hallmarks of the season, residents of University Heights look for another sign of the season—the appearance of blue plastic bags on their front door handles, which means that John Carroll University’s Fatima Family Food Drive is underway.

The Fatima Food Drive collects and purchases enough food for a Thanksgiving meal and a week's worth of groceries for more than 125 families. The project is an outgrowth of JCU’s longstanding relationship with Catholic Charities’ Fatima Family Center. Established in 1973, the Fatima Family Center is located in Cleveland’s Hough neighborhood of Cleveland. JCU students provide weekly service at the center, assisting with aftercare, teen outreach, and senior citizen programming.

The Fatima Food Drive is a student-led project, co-sponsored by the university’s Arrupe Scholars Program and Students for Social Justice. This year, JCU students John Oddo and Patrick Vecellio are spearheading the food drive.

Vecellio explained that the logistics of the food drive “begin even before the school year starts.”  Every September, for the past 12 years, the drive kicked off with Footprints for Fatima—a 5k run and 1-mile walk. The money raised from event is used to buy fresh food, such as turkeys, potatoes, milk, cheese, and eggs. Then, in October, JCU students hang those familiar plastic bags on more than 4,000 doorknobs in University Heights inviting their neighbors to participate.

On the last weekend of October, 95 students and volunteers participate in Make a Difference Day (MADD), a national day of service. At John Carroll, the day involves collecting the plastic bags, generously filled with food by UH neighbors.

The 95-volunteer contingent for MADD not only includes JCU faculty, staff, administrators, and students, but also 22 AmeriCorps volunteers from College Now, a nonprofit organization that provides counseling and access to funds for college for students in the Cleveland Metropolitan School District.

AmeriCorps volunteer Andre Patton said, “We’ve done the food drive with JCU in the past, and we just want to keep up that connection. The great part about it is meeting people who are in the same place, who want to do wonderful things for people in the community.”

In November, JCU students sort and pack boxes full of groceries and deliver the food to families at the Fatima Family Center on the weekend before Thanksgiving. “Delivery Day” concludes the food drive and gives students an opportunity to build relationships with Fatima families.

JCU student Will DiPasquale was present at the 5k run, distributed collection bags, and helped with MADD. He plans to assist with the final step of the food drive. He said, “I want to do delivery day because that’s when you actually see people benefiting and you get to interact with the people at Fatima.”

The Fatima Food Drive fulfills John Carroll’s mission: to encourage student excellence not only in learning, but also in local and international service.

The food drive is part of JCU’s larger commitment to fighting hunger, and it is complemented by advocacy efforts on campus to end hunger locally and globally. Most of all, the Fatima Family Food Drive unites the Hough neighborhood, the residents of University Heights, and the university community in a tradition that officially ushers in the holiday season.

Abbey Vogel is a junior at John Carroll University.