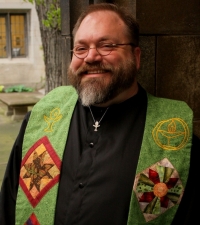 The Rev. Joseph M. Cherry sometimes uses his high school marching band experience as a metaphor for his new role as minister of the Unitarian Universalist Society of Cleveland (UUSC). "We UUs don't march lockstep to outside imposed authority—musical, religious or otherwise," said Cherry. "We're noted for personal autonomy and, within traditional association principles, we compose our own congregational objectives. The band metaphor portrays UUSC as a principled, socially active and diverse religious organization whose members play different roles with different abilities in collaboration with a trusted elected leader."

Cherry was chosen to lead the UUSC congregation on May 4 and commenced his ministerial duties on Aug. 1. He succeeds the Rev. Dr. Douglas Wadkins, who completed a two-year interim ministry.

In 1977, Cherry’s parents encouraged him to watch the mini-series "Roots" with them. The series was based on Alex Haley’s novel about Kunta Kinte, an 18th-century African captured as an adolescent and sold into slavery in the United States. He found the story very troubling, because he saw there was much wrong in our system, and it helped lead him to study American history in college.

Cherry lives in Cleveland Heights in a home he and his partner, Rev. Denis Paul, developmental minister at the East Shore Unitarian Universalist Church in Kirtland, are remodeling. "We joke that we're a mixed marriage because we went to rival UU seminaries. Denis attended Starr King School for the Ministry in Berkeley, and I went to Meadville Lombard Theological School in Chicago. What we got was an amazing amalgam of the two pedagogies—two ways to teach, two ways to learn.

"Meadville tends to focus on ministry and academics. Starr King tends toward a more holistic approach to ministry, so what we have in our five years of being together is the best of both."

Asked to define his ministerial mission, Cherry put it this way: "I'm a minister in a worldwide and lifesaving faith. Part of our mission is to say persons can be unsure. You can say you don't believe in this or that God and that's OK. It's to say that, at this moment, you are OK as you are and don't need saving or redemption. At the same time, we are all capable of growth."

Does this give UUs license to lead selfish, irresponsible lives? "Not at all," said Cherry. "The Unitarian Universalist Society of Cleveland declares three basic aspirations: We strive to be a sanctuary for all who enter, to reflect the diversity of our community, and to work toward a more just and sustainable society. When we live these three challenges simultaneously, we believe we're living decent, redemptive lives."

Often the priority mandate for a new minister is to increase membership. Asked if he had a plan for this, Cherry responded, "Well, yes and no. We don't have to be a power. We can't change people. We can only live our individual lives and live our congregational life collectively with integrity. We don't recruit members or proselytize in the traditional sense. We have to let our lives speak that for us.

"Our faith exists as a tension between two concepts—on the one side, our aspirations and, on the other, who we really are. There are many persons, regardless of age or color, sexual orientation or gender identity, who are in the same place, living these same tensions, who want to find a church where the preacher or dogma doesn't tell them who they are or what to believe. They seek a place absent of fear-imposed authority.

"As more people who feel as we do see us—agnostics, atheists, Buddhists, Christians, humanists and others worshipping together—they will find us, and we will continue to grow."

The Unitarian Universalist Society of Cleveland is located at 2728 Lancashire Road, Cleveland Heights. Visit its website at www.uucleveland.org.

Walter Nicholes, retired, is a 50-plus-year resident of Cleveland Heights now living in an apartment in Shaker. He thinks the Heights communities are remarkable in their successful diversity.