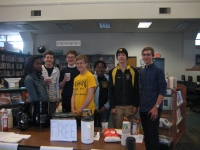 Several Heights High students greeted voters in University Heights today, offering free hot chocolate and information—not about any issue on the ballot, but about themselves.

“We are explaining the current state of the [University Heights] Planning Commission and the issue of moving Heights High to Wiley,” explained Elijah Snow-Rackley, a junior at Heights High. He and several of his fellow students, representing the Student Union, a new student-initiated Heights High group, had stationed themselves inside the University Heights Library.

The CH-UH City School District has been seeking approval from the University Heights Planning Commission since February 2014, to move forward with its plan to use Wiley as transitional space for the high school.

“We are handing out personalized cards to get people to understand that we are real kids. It’s not all about statistics. It’s not just about the safety of the businesses or community security risks. We are going to school to learn, and we would really like to have a chance,” said Snow-Rackley.

The students said they were frustrated with what they viewed as the planning commission’s stalling on the issue. “It’s really disappointing. There should not be that much question behind how much security we need and this and that,” said Andrew Schellenberg, also a junior. “Heights does get a bad rap, but it’s not a bad school.”

“A lot of it has to do with misinformation and a little bit of fear of what high school students are,” added Snow-Rackley. He said he had made a decision to participate in the Election Day meet and greet after speaking at a Planning Commission meeting.

“I was really appalled at what I saw,” he said. “There was an initiative to move the high school to Slavic Village in Cleveland and busing all the kids there. That’s more money than it is worth. We have property here. We share a school district. It shouldn’t be an issue to use Wiley as a transitional school.”

The students handed out a letter to voters, asking them to contact University Heights Mayor Susan Infeld and city council members and “ . . . let them know that you welcome me and my fellow classmates as Heights High students at Wiley School.”

The student union was founded this year by Snow-Rackley and Heights High student Emma Schubert, who was running another hot cocoa station at the John Carroll University polling location. The group seeks to address issues of concern to students and the community. “We want to take action on issues that we feel are affecting us and affecting people in the community and, more importantly, [that] we think are wrong and should change,” explained Snow-Rackley.

Heights senior Imani Frazier said that the group has about 21 members. “We are working hand-in-hand with student council to get ourselves known and to allow everybody to know what we are about,” she said.

Another issue the group seeks to address is that of Heights High spirit wear being produced by sweatshop labor. “We would really appreciate if all of our athletic gear that we are selling and [that] has our logo on it wasn’t made by someone my own age for no money,” said Snow-Rackley.

When this issue came up, the group felt that it was one they needed to tackle right away. “This issue affects nearly all of us for next year,” said Snow-Rackley.

Carol Boykins, a University Heights voter who stopped to drink some cocoa and listen to the students, said, “I support what the students are doing and I am going to call Mayor Infeld. I will definitely follow up.”