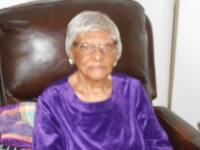 Lessie Brown in her apartment in Cleveland Heights. Photo by James Henke.

Not many people make it to 100 years old, and even fewer make it to 110. Those who do reach 110 are called super-centenarians, and there are fewer than 300 of them in the entire world. In the United States, only about 20 people have reached that age, and one of them lives in Cleveland Heights.

Lessie Brown, who lives in the Concord Apartments near Severance Town Center, celebrated her 110th birthday on Sept. 22. Looking at her, one would never guess that she had reached such a milestone in her life. She looks great and is totally coherent.

Brown was born in Stockbridge, Ga., in 1904. “We lived on a farm,” she said. “I milked the cows, picked cotton and worked in the garden with my mother.” Then, in 1921, her parents moved to Cleveland. “My mom and dad just figured it would be better up here than down there,” she explained.

The family lived near East 87th Street and Quincy Avenue in Cleveland. In 1925, Brown got married. She and her husband had five children—three girls and two boys. Her husband died in 1991, and three of her children are still alive: Veerline Wilson, who’s 85 years old, Vivian Hatcher, 86, and Robert Brown, 88.

After her husband’s death, Brown moved in with her daughter Veerline, who at the time lived in University Heights. The two then moved to the Concord Apartments in 1996.

Asked if she had ever imagined that she would live this long, Brown said, “No, I never once thought that I would live anywhere near this long.”

“She has led a good life,” her daughter Veerline said. “She hasn’t indulged in anything that would be detrimental to her life.”

Brown said she has had surgery twice in her life, but never for anything serious.  She does suffer from arthritis, but otherwise is quite healthy. “I really just think that it was the Lord’s will that has enabled me to live this life for so long,” she said.

Brown attended services at the Emmanuel Baptist Church at East 79th Street and Quincy Avenue for many years. Though she can no longer make it over to the church, the minister comes to her apartment and gives her communion at least once a month.

“I read library books and the Bible,” said Brown of her life these days. She also walks around her apartment quite a bit to get exercise. “Overall, I’m just very thankful that I have lived this long,” she said.