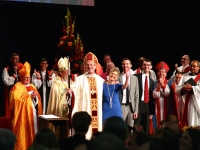 Alan M. Gates, his wife, and two sons wave to supporters after Gates' ordination and consecration as the 16th bishop of the Episcopal Diocese of Massachusetts.

Boston University’s Agganis Arena was transformed from sporting arena to sacred space on Saturday, Sept. 13, as the Episcopal Church ordained and consecrated the Rev. Alan M. Gates as the 16th bishop for the Episcopal Diocese of Massachusetts. Gates, 56, served as rector of St. Paul's Episcopal Church in Cleveland Heights from 2004–14.

More than 3,000 participants and guests from around the country and across the globe—including 28 bishops—attended the event. Among them were 115 supporters from St. Paul's Church.

Following the sermon, participating bishops solemnly placed their hands on the bishop-elect's head during a sacred prayer of consecration—a passing on of episcopal authority in what is believed to be an unbroken line from Christ’s apostles.

Several St. Paul's clergy, staff and parishioners took part in the ceremony, which included the presentation of gifts to the newly ordained bishop. One gift, a crozier (a symbolic staff similar to a shepherd's crook), was designed by Hollingsworth and crafted by him and Abe Hoder, an Amish craftsman from Baltic, Ohio. It is made of white oak, harvested in the heart of Ohio's Amish country.

The event included music from a combined choir of 550-plus singers from nearly 75 parishes, and featured a brass ensemble, a steel drum band and a handbell choir in addition to traditional and gospel choirs. Parts of the service were read or sung in multiple languages—among them English, Spanish, Chinese and Xhosa—to reflect the church's diversity.

At a reception following the ceremony, Gates thanked the attendees for their outpouring of support.

Gates was elected bishop of the Diocese of Massachusetts by the clergy and lay delegates of the diocese at a special electing convention held April 5 at the Cathedral Church of St. Paul in Boston.

Gates is a Massachusetts native and a graduate of Middlebury College. Prior to attending seminary he was a Russian language translator, researcher and intelligence analyst for the U.S. Department of Defense and the State Department. He holds a Master of Divinity degree from Episcopal Divinity School in Cambridge, Mass., and was ordained to the priesthood in 1988. Prior to his call to Cleveland Heights, Gates served congregations in the Episcopal dioceses of Massachusetts, Western Massachusetts and Chicago. He and his wife, Patricia J. Harvey, have two adult sons.

Andrea C. Turner is the Heights Observer E-news editor and owner of ACT One Communications, LLC. Turner, a member of St. Paul's parish, attended the ceremony in Boston.