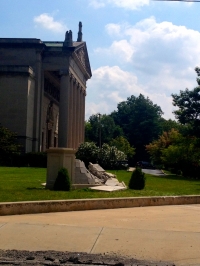 On the afternoon of Tuesday, Aug. 26, the Rev. John McNulty, Communion of Saints Church pastor, was working in his office when he heard a loud "bang." The source of the noise was a two-car accident at the corner of Cedar and Coventry roads, which resulted in the destruction of the church's stone sign at that intersection.

According to the police report, a female driver was driving west on Cedar Road, in the direction of downtown Cleveland, at approximately 1 p.m. She initiated a left turn onto Coventry Road, and simultaneously struck a pickup truck. That truck was driven by a man who was heading south on Coventry Road and making a left turn onto Cedar Road. The pickup truck driver, who had a green turn signal at the time of the incident, proceeded to turn left through the green light. The woman, reportedly, neglected to stop, causing the male driver to swerve his car in an attempt to avoid hitting her. His truck, however, did strike her car, then traveled approximately 25 yards and plowed into the church’s concrete sign. The female driver has been charged with "disobeying traffic."

"Two young men got the driver out of the truck, which was a blessing," said McNulty. The male driver reportedly sustained a neck injury and was transported to University Hospitals for medical evaluation. The female driver sustained no injuries. Both vehicles were towed from the scene.

Although there were pedestrians walking nearby when the accident occurred, none were struck. Following the accident, police temporarily blocked off Cedar Road to traffic.

"Luckily, it was an hour before the school dismissal," commented Kathleen Tark, a resident of nearby North St. James Parkway, referring to Communion of Saints Catholic School, located on the church's campus.

McNulty stated that there have been accidents at the intersection in the past. "It's a quick light, and there doesn't seem to be a lot of time to get through," he noted.

The rubble debris from the demolished sign has since been cleared.

"It may take a while, but we do plan to restore the sign," said McNulty.