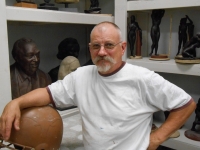 David Deming in his studio in Lakewood. Photo by James Henke.

On Aug. 2, the Cleveland Indians unveiled a new statue of Jim Thome, the team’s all-time home-run leader, at Progressive Field. The statue was designed and sculpted by Cleveland Heights resident David Deming.

Deming, 71, has an international reputation as a fine sculptor, and has been involved in the art world for more than five decades.

He grew up in Lakewood and attended Lakewood High. While in high school, Deming focused on both sports—he was captain of the wrestling team and also ran track—and art. On weekends, he attended classes at the Cleveland Institute of Art (CIA), and, after graduating from high school, got his bachelor of fine arts degree from the institute in 1967. Deming then taught classes at Boston University for a year, before moving on to the Cranbrook Academy of Art in Bloomfield Hills, Mich., where he earned a master’s degree in fine arts. “When it comes to sculpture, Cranbrook is like the Harvard or Yale of art schools,” Deming said.

After graduating from Cranbrook in 1970, Deming got a job on the faculty of the University of Texas in El Paso. “I really didn’t like El Paso very much,” he said. “So one time I took a trip to Austin, and I thought, ‘Wow, that’s where I want to be!’ ”

After spending only a year in El Paso, he landed a faculty position at the University of Texas in Austin. Deming remained at the university for 26 years and, during that time, served as chairman of the fine arts department and then as dean of its College of Fine Arts.

While in Texas, Deming built a strong reputation as a sculptor. He began to get work all over the United States, as well as in other countries such as Japan and Italy. “Even though I was teaching, I was always motivated to be in the studio, producing my own art work,” he said.

Deming returned to Greater Cleveland in 1998, after being named the president of CIA. When he came back to his hometown, he moved to Cleveland Heights. “My wife said we should move to Lakewood,” he said, “and I told her, ‘No. We’re moving to Cleveland Heights!’ ” Deming recalled, “I drew a circle around the institute and told my realtor that I wanted a house that was no more than five minutes away from CIA.” He and his wife, Ann, live on Roxboro Road. They are the parents of three children: Matthew, 45; Lisa, 44; and Michael, 40.

Though they share the same last name, David Deming said he is not related to Grant and Barton Deming, brothers who developed much of the west side of Cleveland Heights during the early 1900s. “I did think it would be great to live on Demington Drive,” he said. “But that didn’t happen!”

Deming spent 12 years as the president of CIA before retiring in 2010. “I told them that when I turned 67, I was going to walk away,” he said. “I wanted to be in my studio full time. I love having that time uninterrupted.” His studio is located on Athens Avenue in Lakewood.

In addition to the Thome statue, Deming has made many pieces of art that can be seen around the Cleveland area. He created a statue of former Congresswoman Stephanie Tubbs Jones that’s in University Circle, and he sculpted a statue of former Plain Dealer music writer Jane Scott that’s in the Rock and Roll Hall of Fame and Museum. In addition, he will soon be working on another statue for the Indians. That one will be of Larry Doby, who was the first African-American player in the American League. It will be unveiled at Progressive Field next summer.

Deming remains very focused on his sculpting. “I work anywhere from 10 to 12 hours a day, every day,” he said. “Then, if my wife needs me at home for something, I drive back to Cleveland Heights from Lakewood. I’m just very highly motivated to be working in my studio.”