Heights historical photo of the month 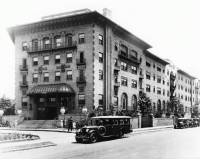 Built in 1923, the Alcazar (Spanish for "Home in a Fortress") Hotel was the first suburban hotel in the Greater Cleveland metropolitan area, with its 175 apartments primarily serving a residential and family clientele. In addition to its residential role, the Alcazar provided space for a wide variety of entertainment. In the 1920s and '30s, the hotel advertised Saturday night dining and dancing, tea dances, musicals and dance school recitals.

Architect H.T. Jefferey chose a design that reflects Moorish buildings in Spain, and was directly inspired by the Alcazar and Ponce de Leon hotels in St. Augustine, Fla. The general vogue for Spanish architecture in the 1920s, of which the Cleveland Heights Alcazar is an early representative, is related to the Florida boom of those years.

This photo was selected by the Cleveland Heights Historical Society, a nonprofit organization dedicated to preserving and promoting the diverse character and traditions of Cleveland Heights. For more information, and to view additional historical images, visit www.chhistory.org or www.facebook.com/clevelandheightshistorical.