Coventry Village is a clothing mecca 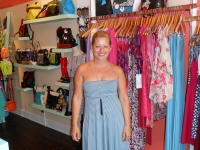 Laurie Klopper, the owner of Blush Boutique on Coventry Road.

The north end of Coventry Road, between Mayfield and Hampshire roads, is something of a mecca for people wanting to buy clothes. This short stretch of Coventry features six stores that specialize in clothing. There are three chain stores—American Apparel, Next and Avalon Exchange—and three small, specialty stores—Blush Boutique, Sunshine Headquarters Too and Heart and Sole. In addition, there’s also Attenson’s Books and Antiques, which carries a selection of vintage clothing. As Steve Presser, owner of the Coventry toy store Big Fun, said, “It’s the most eclectic clothing district in Cleveland. No other block has so much variety, from new and used to funk and junk.”

The largest store, American Apparel, is part of an international chain headquartered in Los Angeles. Founded in 1989, as a sweatshop-free manufacturer, the company opened its first retail store in 2003, and offers clothing for just about everyone—from toddlers and infants to men and women. The chain now has more than 260 stores worldwide, but the Coventry store, opened six years ago, is its only Greater Cleveland location. The chain manufacturers all of the clothing it offers.

One store down from American Apparel is Sunshine Headquarters Too. Possibly the most unique clothing shop on the street, it has been on Coventry since 1972. Doug Hayslip has owned the store for more than 30 years. “We are a very special boutique,” he said. “We carry everything from minks to bongs. All of our stuff is hand-picked, and we carry very few of the same items.”

Two stores south of Sunshine is Next, an Ohio-based chain with five stores in Greater Cleveland. Next was founded in 1996, and the Coventry store opened in 2010. The store carries what could best be described as urban street wear, and offers both men’s and women’s clothing, as well as shoes and jewelry.

Next door to Next, at the corner of Hampshire and Coventry roads, is Avalon Exchange. Avalon also has stores in Lakewood, Columbus and Pittsburgh. The Coventry store opened in October 2010, and most of its inventory is used. “Someone comes in every five minutes to sell their clothes,” Lau’ren Hamblin, the store’s assistant manager, said. “We sell vintage clothes, designer clothes and standard mall-type items. And we have a lot of things you can’t find any longer in other stores, but they are still available here.”

In addition to the used items, Avalon also offers some new clothing items. “We bring in new items once a month,” Hamblin said. “And that includes women’s apparel, men’s apparel and jewelry.” The store also has dollar sales twice a year. The next one will take place the first three days of August.

Across the street from American Apparel, on the east side of Coventry, are two locally owned stores, Heart and Sole and Blush Boutique. Heart and Sole opened in September 2007. Vince Manzano, 25, is one of the store’s owners, and he and two friends—Kenny Bencke and Kevin Washington—opened the store shortly after their graduation from Heights High. “We wanted to fill a void,” said Manzano. “We wanted to create the first sneaker boutique in Cleveland.”

“We try to carry rare, exclusive sneakers,” Manzano said, “the highest tiers, like Addidas, Reebok, Puma and New Balance.” In addition to the sneakers, Heart and Sole also sells some clothing, including such high-end brands as Publish, the Quiet Life, Acapulco Gold, ICNY and Motivation. The store also presents art shows, featuring work created by students from the Cleveland Institute of Art. “We are trying to keep the spirit of Coventry alive,” Manzano said. “We don’t want the street to become a Crocker Park or a Legacy Village.”

Next door to Heart and Sole is Blush Boutique. Laurie Klopper, who was a lawyer for 12 years, opened the store in November 2009. “Cleveland has very few little boutiques,” she said. “It’s more of a mall town. So I wanted to create a store that carried smaller, independent lines that you won’t find in a department store.” Blush focuses on women’s clothes, and among the brands it offers are Mystree, VFish, Ryu, Oka-B and Frankie Four. “We try to keep the prices under $100 for all of the clothing,” Klopper said. “Not all boutiques are really expensive.”

Klopper only orders six of any one item. So when they are sold out, that item is no longer available. “The clothes we sell are things that you can pull out ten years from now, and you will still want to wear them,” she said. “And they are items that you can wear to work, to kids’ sporting events, on a date, etc.”

Blush also sells jewelry. All of it is hand-crafted, and 95 percent of it is created by Cleveland-area jewelers. In recent years Blush has also started carrying other items, such as candles, books and chocolates. “It’s trial and error,” Klopper said. “I just try to see what works.”

All of the store owners and managers agreed that this section of Coventry is unique and offers clothes buyers many different options. “It’s a really good mix of stores,” Klopper said, “and I really love this neighborhood.”