Brennan's 'colony' comes together over T-shirts and a beer 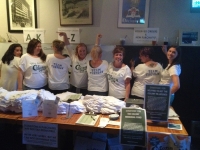 Members of Team Tuesday prepare to distribute shirts on July 19 at The Tavern Company. [Photo by Shannon Morris]

For three hours on Saturday, July 19, it was hard just to get in the door at The Tavern Company—the Lee Road pub that Jim Brennan managed before buying the Colony in 1991. Now owned by Chris Armington, himself a 12-year Brennan employee, The Tavern Company served that night as the location where people could pick up pre-ordered “We Are A Colony” T-shirts and gather yet again to remember Jim "JB" Brennan, who was shot to death in his business across the street on June 30.

“I’m still in shock,” Armington said. “It keeps me up at night. And there are so many triggers that make me think of JB. Like, he drove a (Toyota) 4Runner and now any time I see one out of the corner of my eye, I expect I’m going to see him.”

Armington and his staff were busy the night of the T-shirt pickup. The restaurant was already filled with the usual Saturday night crowd—plus dozens of people at a time who came to pick up their shirts, still looking for solace nearly three weeks after Brennan’s murder.

Armington bounced between fetching drinks, seating patrons and standing for at least one TV anchor who set up to interview him in the middle of the busy path between the restaurant’s front and back rooms.

Many of the people there admitted to not even knowing Brennan except by reputation—and as owner of their long-time favorite gathering place. It's as if they were transferring their affection for the Colony and the community to his memory.

And those who knew Brennan best—such as the handful of current and former Colony employees sitting at The Tavern Company bar that night—seemed to be talked out.

“I’ve talked with all the reporters and said what there is to say,” said Allison Edgerton, a server at the Colony for more than five years. She was sitting with Timothy Huber, a former Colony employee and now a criminal defense attorney. Together they formulated a single offering to those who didn’t know Brennan well: “He was a private guy. To many people it may have seemed like he didn’t have a lot to say. But [the Colony] was a good place to work and he really cared about people. As an employee, if something happened in your life and you needed money, he would give it to you out of his pocket.”

At the time, the restaurant’s reopening hadn’t yet been announced, but Edgerton said she would be there when it happened. It reopened July 22.

“JB was about as quiet and private as you can get,” Armington said in a separate conversation. “But with his employees, he would make it a point to sit down with every one of them for a couple minutes—maybe as often as every week—and ask about their kids, school, whatever you had going on in your life. He wasn’t doing it just to make small talk or because that’s what a good boss is supposed to do. He truly cared.”

Kyra Hall, a hostess at the Colony for the last three years and a sophomore at Ohio University, recalled the first time she ever had to build up the courage to ask a boss for a raise. “We sat down across from each other; I was so nervous,” she said. When she finally blurted out her request, Brennan’s easy smile diffused the tension. “He laughed and told me I was doing a good job, and said, ‘I’ll see what I can do.’ Of course he bumped me up,” she said.

“It sounds cliché,” Edgerton said, “But at the Colony we were all best friends. We were family. JB was at the center of that. He was like our dad. It’s like losing our dad.”

Todd Guenther, owner of Logos on Lee, knew Brennan mainly through business, doing the frequent screen-printing work the Colony needed for uniforms—for employees as well as the large number of sports teams it sponsored. “You couldn’t find a better guy to deal with,” Guenther said. “He listened, he made up his mind, he kept his promises. I don't know a single person who ever said one bad thing about Jim.”

Guenther donated screen-printing for the “We Are A Colony” shirts that were being distributed a few feet away. Team Tuesday—the group of 11 women who put together the T-shirt project—paid for the shirts using some of the proceeds of the sale.

The group’s name derives from regular Tuesday evening gatherings at the Colony by its members. When they announced the T-shirt project, they indicated the proceeds would be donated to the Lee Road Merchant’s Association.

That drew public accusations of exploitation from a small number of people—concerned that other businesses would try to benefit from the tragedy.

As a result, members of the group have grown reticent about discussing the project until it's complete. But according to Shannon Morris, a Team Tuesday member and Cleveland Heights resident, such fears are unwarranted; they result from how fast the project took off. They got into the logistics of printing and distribution so quickly there was little time to plan how to use the proceeds, or to craft talking points to avoid confusion and misinterpretation.

“What strikes me the most is everyone tends to always underestimate Cleveland Heights. They say it’s going downhill, or it’s not as good as Shaker Heights. Well it’s the strongest community I’ve ever observed and lived in,” Morris said. “It never even occurred to us not to just jump out there and do something. We knew in our hearts this would be good—and we saw it come to fruition, which is amazing and overwhelming.”

For the record, Morris said it’s still too soon to know how much money “We Are A Colony” has actually raised. Back-of-napkin calculations indicate about $15,000 has come in. But expenses are still being figured out, including the cost of the shirts and ink, and several hundred dollars so far to ship out-of-state and international orders. Potential tax liability is also a question.

Morris points out that Team Tuesday isn’t a business organization—or any kind of organization —that’s used to handling projects like this. It’s just a group of friends who acted on instinct.

“Of course we’re not keeping a single penny,” Morris said. “Whenever it is said and done, we want to make sure the money is given with the blessing of the family and employees.”

Proceeds from pre-ordered T-shirts will be donated to the Cedar Lee Special Improvement District (CLSID)—a public/private partnership with a mission, according to its website, “to improve the local economy and the overall business climate in the Cedar Lee Business District.” (The Lee Road Merchants Association, reported initially to be the recipient, no longer even exists.)

While the group has informed CLSID’s executive director, Kelley Robinson, the donation will be coming, there have been no formal efforts yet to discuss its use.

Proceeds from T-shirts purchased at the July 19 event will go directly to a memorial fund being managed by Brennan’s family and Colony employees, Morris said. Any remaining “We Are A Colony” shirts and car magnets will be donated to the Colony for use as its management sees fit.