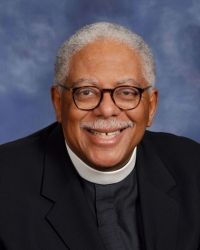 Lewis recently retired as rector of Calvary Church in Pittsburgh, a congregation of similar size to St. Paul’s. A native of Brooklyn, N.Y., he holds a bachelor’s degree from McGill University, a master’s of divinity from Berkeley Divinity School at Yale and a doctorate in theology from the University of Birmingham (England).

Lewis has distinguished himself as a scholar and an author, and has taught at the George Mercer School of Theology, General Theological Seminary, New York Theological Seminary, Pittsburgh Theological Seminary and Anglican seminaries in the Congo, South Africa, Mozambique and Barbados. In 1996, Lewis’ doctoral dissertation from the University of Birmingham was published: Yet With a Steady Beat: The African American Struggle for Recognition in the Episcopal Church was the first book about the history of black Episcopalians since George Freeman Bragg’s History of the Afro-American Group of the Episcopal Church in 1922. Lewis is a pianist who enjoys accompanying soloists, and several of his hymns appear in Lift Every Voice and Sing II and other hymnals.

While serving as director of the Office of Black Ministries at the Episcopal Church Center in New York, Lewis served as consultant to the Church of England and its Archbishop’s Commission on Urban Priority Areas.

In addition to his parish ministry at Calvary Church, Lewis has served St. Monica’s Church (Washington, D.C.), St. Luke’s (New Haven, Conn.) and St. Mark’s (Brooklyn, N.Y.). At each church, Lewis had a reputation as an insightful and prophetic preacher. He often said that a good sermon must warm the heart, challenge the intellect and motivate the will.

“We look forward with great anticipation to working with Dr. Lewis,” said Tami Brown, senior warden of St. Paul’s Vestry, the governing body of the parish. “He provides a passion for preaching and music, two skills St. Paul's values highly. He will challenge us with new ideas while stewarding all that is great about the parish.”

“I am delighted for the Rev. Dr. Harold T. Lewis to serve as St. Paul’s interim rector,” said the Rt. Rev. Mark Hollingsworth Jr., bishop of the Episcopal Diocese of Ohio. “He will serve St. Paul’s well through this period of transition, maintaining the high standards of preaching, pastoral care, and administrative oversight upon which this congregation relies. Dr. Lewis and his wife, Claudette, will be a great addition to both our parochial and diocesan life.”

“Claudette and I look forward to being part of this vibrant faith community,” Lewis wrote in a communication to the parish. “We are struck by the enthusiasm, dedication and zeal for the Gospel which are palpably present.”

St. Paul’s former rector, the Rev. Alan M. Gates, was elected bishop of the Episcopal Diocese of Massachusetts in April. He ended his 10-year tenure at St. Paul’s on June 1. Lewis will serve the parish until the vestry concludes its search for the priest who will become St. Paul’s 16th rector.

Kim Fry is the director of communications at St. Paul's Episcopal Church.