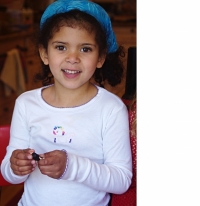 On Father’s Day 2013, Eric Meyer enjoyed breakfast in bed prepared by his three children, before a day of “just hanging out” and celebrating being home in Cleveland Heights after an overseas business trip. On Father’s Day 2014, he and his family were sitting shiva, a Jewish tradition of mourning the dead, for his daughter Rebecca.

Rebecca Alison Meyer died at her home on her sixth birthday, after a 10-month struggle with brain cancer. At her death, as in her life, she was surrounded by her family—father Eric, her mother Kat, her 10-year-old sister Carolyn and her 3-year-old brother Joshua—along with numerous friends. Known as Becca to many, she had told her parents that 6-year-olds are big girls and deserve big-girl names, and she made it to 6, so Rebecca it is.

Last August, Rebecca was diagnosed with grade 3 anaplastic astrocytoma, a rare and aggressive pediatric brain tumor, while the family was vacationing at the Jersey Shore. Severe headaches followed by a seizure landed her in a regional medical center before she was airlifted to the Children’s Hospital of Philadelphia (CHOP), which became the family’s second home for nearly three months. Following a successful surgical removal of the tumor, Rebecca embarked on seven weeks of proton beam radiation, available only at CHOP, while the family shuttled back and forth between Cleveland Heights and Philadelphia, juggling the ordinary care of their healthy children with the extraordinary care of Rebecca.

By November, the family of five was together again at home, with Carolyn a fourth-grader at Roxboro Elementary School and Rebecca attending kindergarten at Fairfax Elementary School, whenever she was able. Her teacher, Michael Heffern, said the other children would scream with delight, “Rebecca is here!” on the days she came to school, and that she lit up the room with her mischievous grin and joyful ways.

Rebecca continued outpatient treatment at the Cleveland Clinic, receiving IV and oral chemotherapy, and remaining remarkably healthy: she danced and laughed and played, she never lost her trademark brown curls, she continued her gymnastics lessons and made new friends wherever she went.

Her father, a technical author and web design consultant, began blogging his family’s experience with Rebecca’s illness as soon as it began (at meyerweb.com/eric/thoughts/), closing his very first post with, “She is so small, and so strong, and we are so scared.” His fame in the technical world brought the story a following of thousands from all over the country and around the globe, with people falling in virtual love with the spunky and spirited daughter he described so honestly in his entries.

Eric said the writing helped him work through his own feelings, exercise a small bit of control in a situation over which they had so little, and deglamorize the world of childhood cancer. “It’s not a movie tucked neatly into 90 minutes, with the swelling 80-piece orchestra directed by John Williams making it all a beautiful heartache. This is real life and it’s ugly, it’s messy and it’s painful,” he wrote.

The Meyer family kept on doing what they had to do, balancing the needs of their children, giving Rebecca guidance and limits despite her illness, maintaining as normal a life as possible. The children went to school and did their homework, mixed in with playdates and special events with their many loved ones.

In March, Carolyn honored her sister by shaving her head at the Cleveland Heights St. Baldrick’s event, raising more than $10,000 for childhood cancer research and inspiring numerous classmates to do the same, including three other fourth-grade girls who went bald in solidarity with their friend. The event raised a record-breaking $120,000 shaving 160 heads, including those of 25 Fairfax students and Rebecca’s teacher, Michael Heffern.

The event also marked one of the last truly hopeful and happy times for the Meyers. Four days later, an MRI revealed a new tumor growing behind Rebecca’s left eye. Doctors at the Clinic and CHOP determined that surgery could leave her severely brain damaged, and viable options were slim to none. Eric described his and Kat’s frustration at learning how little there was to even try at that point: “When you finish the standard protocols, there just isn’t anything left. And the few studies that do exist are reactive instead of proactive, so you don’t qualify until there’s already a tumor threatening to kill your child.”

After several weeks of searching and hoping and begging, Rebecca was granted entry into a clinical trial at the Children’s Hospital of Pittsburgh, requiring thrice-weekly visits for an experimental drug everyone hoped would prolong her life. But partway through May, the spark they had known as Rebecca began to fade, her once boundless energy slowly draining from her body. The child who “never walked when she could skip” was sleeping more and more hours of the day, or sitting inert in a stroller she’d long since outgrown. The trial drug hadn’t worked.

Rebecca rallied for her sixth birthday party, an over-the-top joint affair with her best friend Ruthie McFarland, held on June 1. She even went to school, still in her stroller, on June 5 to celebrate her last day of kindergarten. Two days later, on her sixth birthday, she died in her purple-canopied bed, surrounded by family and friends.

The reaction from the community, both local and virtual, was swift and widespread. The funeral service, held at Anshe Chesed Fairmount Temple, was awash in mourners clad in purple, Rebecca’s favorite color, and trees along Fairmount Boulevard were adorned with purple ribbons. Rabbi Josh Caruso honored “the bold and determined Little Spark,” speaking of Rebecca’s “internal awesomeness and epic fortitude.” Her father eulogized her, bringing those assembled to both laughter and tears, and her big sister Carolyn sang a medley of Rebecca’s favorite songs, with grace, courage and poise well beyond her 10 years.

Facebook profile pictures were replaced with photographs of Rebecca, a Twitter hashtag campaign was launched and purple reigned on the Internet. The family requested donations be made to the St. Baldrick’s Foundation (www.stbaldricks.org/fundraisers/mypage/539/2014), which raised nearly $14,000 in the first week after Rebecca’s death, or to the Ronald McDonald House of Philadelphia (www.philarmh.org).

When asked if there could be a silver lining to any of this, Eric didn’t hesitate to say that there’s always a silver lining. One of the messages he and Kat have heard repeatedly from readers is how Rebecca’s story helped them realign their priorities. “As soon as I finish writing this comment, I’m going to log off the computer and spend some quality time with my own kids,” wrote one. The legacy of Rebecca for those who knew the Meyers, and even for those who didn’t, was that she led them to focus on what matters most in their own lives, primarily family and friends.

And that’s true for the Meyers as well. As we wrapped up this interview, Eric was being tugged into the house by a hungry 3-year-old Joshua who was asking for a ketchup sandwich. “I’m still a father,” said Eric, gently insisting that the sandwich should have more than just ketchup.

Krissy Dietrich Gallagher lives in Cleveland Heights with her husband Mark and her sons Braedan and Austin, a two-time cancer survivor. She is a public school advocate, organizer of the Cleveland Heights St Baldrick's head-shaving event, and blogger at www.krissygallagher.wordpress.com.