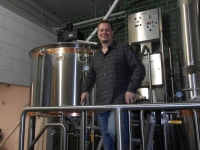 Jason Workman in the brewery at his new restaurant, Butcher and the Brewer.

A unique restaurant, called the Butcher and the Brewer, will be opening on East Fourth Street in downtown Cleveland later this month or in early July.

The new business will include a butcher shop selling fresh cuts of meat, charcuterie, smoked meats, terrines and sausages, as well as cheeses, eggs, dairy products, jams and other locally produced artisan products. Customers will be able to order sandwiches and other items at the shop.

The restaurant will offer a variety of beers that are brewed on-site, a menu of fish, meat and vegetable entrées, and small plates and bar snacks. The menu was inspired by rustic farmhouse fare and will embrace ethnic food traditions that are fundamental to the spirit and flavor of Northeast Ohio.

“We’re not serving traditional dinners,” said Jason Workman, who lives in Cleveland Heights and is one of the owners. “It’s a menu that is meant for sharing. Each person can order one or two plates, and we’ll bring them out as they are ready. The idea is for people to taste a bunch of things while they are there.”

With his partners Chris Lieb and Jeff Leonard, Workman opened the Tremont Tap House on Scranton Road in 2007. That restaurant was the city’s first gastropub. They came up with the idea for the new restaurant after reminiscing about the butcher shops that were common decades ago.

“There were four butcher shops in the neighborhood where I grew up,” said Workman, who spent his youth around East 71st Street and Superior Avenue. “You could go in and talk to the butcher. And there was always a big difference between the meat you could get at the butcher shop and what you’d get elsewhere.”

In addition, said Workman, he always wanted to get into brewing beer. In fact, he and his partners opened a small brewery at their Tremont restaurant.

Workman, 40, has been working in restaurants since he was 15. His first job was at Morton’s the Steakhouse downtown. Later, after serving in the Navy, he was a bartender at the Hyde Park Grill, which was on Coventry Road, and he lived in an apartment above Heights Hardware. He currently lives on Scarborough Road, across from Fairfax Elementary School.

“I really love Cleveland Heights—the proximity to downtown, the houses and the architecture, the culture and the diversity of the people,” Workman said. He and his wife, a teacher at Lomond Elementary School in Shaker Heights, have a 5-year-old daughter.

Workman is excited about the new restaurant, which will be in the space formerly occupied by Dredgers Union clothing store. “It pays homage to a past era, a time when craft and commerce were in the hands of skilled tradesmen with an attention to detail and a lifelong dedication and passion to their profession,” he said.