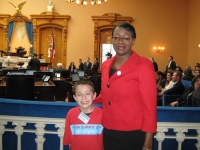 In his third-grade class at Fairfax Elementary School, student Kenji Sakaie had been learning about community and government. When invited to embrace his role in the democratic process with his mother, Joan Spoerl, at the Mama Summit in Columbus, he jumped at the chance. Organized by Moms Clean Air Force with various partners, the Mama Summit brought together 50 Ohioans to advocate for a safer and healthier future for the state’s children.

Sakaie made posters to give to his state representative, state senator, and the governor, and was even able to send posters for U.S. Senators Sherrod Brown and Rob Portman, to be delivered in person by a Moms Clean Air Force representative based in Washington, D.C.

Spoerl was one of the speakers at a press conference where Sakaie was able to meet the keynote speaker, Rep. Tracy Heard. Sakaie and his mom met with staff in state Sen. Shirley Smith's office and met Sen. Nina Turner on the Ohio Senate floor. He helped deliver 600 signatures to Gov. Kasich and was part of the group recognized on the floor of the Ohio House of Representatives where he also saw The Ohio State University marching band play "Hang on Sloopy!"

While Sakaie can't vote, he wants legislators to know that he and other children are depending on their public servants to develop policies that promote and protect their health and well-being. He and his mom asked the lawmakers to promote and protect public health through laws that will reduce Ohioans' exposure to toxic chemicals in the air, water and everyday household products, such as air fresheners, cleaning and laundry products, lotions, shampoos and lawn chemicals.

They pointed out that pediatric health experts have determined that even low exposures to environmental chemicals can harm children's health and are significant factors in the epidemic rises of chronic diseases among American children—asthma rates in children have tripled in the last 30 years (208,000 Ohio children have asthma), some birth defects have tripled, and cancer rates, ADHD, autism and food allergies are on the rise.