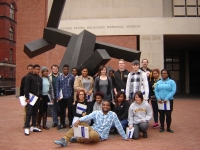 The students left Heights High at 3:30 a.m. and arrived in Washington, D.C. around 10 a.m. The experience at the museum included a special session with a Holocaust survivor who, as a teenager, was able to survive the notorious Nazi death camp Auschwitz because of his language skills. He was an interpreter for the Nazis and their collaborators and this allowed him to avoid being sent to the gas chambers.

Afterward, the students spent time viewing the exhibits at the museum, and each of them was touched in a unique way. Students said they were most impacted by the Daniel's Story exhibit, the children's artwork, and a cattle car that had transported people to the death camps.

The students also visited the memorials of Dr. Martin Luther King, Jr. and Abraham Lincoln before boarding the bus to return home. Visits to these monuments established connections to the historical and ongoing battles for human freedom and dignity.

The bus arrived back in Cleveland Heights, after stopping for a dinner break, around 1 a.m.—a mere 22 hours after it had left.

After the trip, students gathered with a representative from ADL and Dan Zelman ('74), one of two Heights High alumni who helped sponsor the trip. The students shared their most meaningful experiences at the museum. They discussed how they can be more tolerant of people of all backgrounds, and how they are committed to being upstanders and not just bystanders when they witness prejudice and discrimination.

Other sponsors of the trip included Giant Eagle Super Markets and Sandy Seiger ('76). Zelman and Seiger had donated to the Holocaust Education Fund of the Cleveland Heights High School Alumni Foundation, which accepts donations from alumni and others who are interested in supporting Holocaust education for Heights High students. Meals were provided by Corky & Lenny's, Mister Brisket and Executive Caterers at Landerhaven.

As part of the ADL program, students were asked to write a brief letter to someone they know describing their thoughts and feelings after visiting the museum. Here are a few of them (others can be seen online):

Dear Mom: Visiting the Holocaust Museum brought tears to my eyes. Going from floor to floor and seeing everything that people went through broke my heart. My mind filled with hate for Hitler and the Nazis for what they had done to millions of people, but as I talked to the Holocaust survivor I saw that her heart wasn't filled with hate, just sadness. So why should I hate? Experiencing all the pictures and artifacts really opened my eyes. We need to learn more to prevent events like the Holocaust from happening. It's up to us to stop racism and make the world better. – Tahjane

Dear Mom: After visiting the Holocaust Museum today I've become more aware about the discrimination going on around us. Also I've promised myself to always stand up to hatred and discrimination. I learned that what I do can make a difference – love, Kortney

Dear Bella: Today I was able to visit the Holocaust Museum in D.C. It was very emotional but at the same time very informative. The Museum gave me an in-depth view of the horrors that the Jews experienced in the concentration camps and ghettoes. Before this trip I had no idea how many camps and ghettoes the Nazis had actually built and created. It must have been horrifying to have lived in them. – Hanna

Dear Mom: I knew that this experience at the Holocaust Museum was going to be emotionally tolling. What I did not expect, however, was the amount of purely harrowing things we saw. I feel humbled and was brought back to earth. Coming to this museum is an experience that everyone should have. – Peyton

Dear Dad: After visiting the Holocaust Museum I've truly gained a whole new viewpoint of what went on during the Holocaust. I've never been exposed to the real horror stories of this genocide. So many things shocked me, it was unreal. When you mentioned the room of shoes to me and said that it's really hard to even begin to fathom that all of those shoes belonged to someone at some point . . . you were completely right. I hope we can go there together someday. While I was there I felt sadness overtake my whole being. It was just so sad. Why did this have to happen to our people? Today was a very important experience and I'm so glad that I was given the opportunity to go  – Marcy

Dear Daddy: The museum was life changing for me and I hope for the others as well. To be able to experience things such as walking through a 'cattle car' or viewing the generations of a town in hundreds of photos was amazing. I wish the Holocaust never happened, but without this experience how would the world know how to fight and react to situations similar to it? The world is forever stained with the memories and evidence of this event. I hope we never forget! –Tozsha

Dear Gabriel: Today I visited the Holocaust Museum in Washington, D.C. It was a very interesting experience. I know you are too young to understand the importance of the Holocaust but I hope one day you grasp the severity of it. Summed up in one word the museum is 'enlightening'. I have learned so much. One of the most memorable scenes was on the second floor. I saw a video of Russian, British and American troops at liberation of some of the concentration and death camps. I was shocked at what they were seeing. It shook me to my core. As you know I am pretty emotionless and I was appalled by what I saw. You know I don't say I respect many people, but the survivors have my utmost respect for what they went through. I hope one day you get to experience the Museum – Ethan

Dear Mom: My experience at the museum was incredible. It made the Holocaust seem more realistic to me. It helped me see it through their eyes. I felt terrible when I saw the huge amount of children's shoes. Made me realize how many lives were taken, especially those of children. This experience made me realize how important it is to tell their stories so that they won't be forgotten and these horrors won't happen again. – Qianna