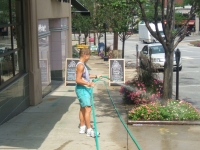 Manyo was struck from behind by an automobile shortly after 9 p.m. on Oct. 3, while she was riding her bicycle westbound on Fairmount Boulevard. According to Cleveland Heights Police, the motorist stopped briefly but then accelerated at a high rate of speed, dragging Manyo, who was trapped under the vehicle, a short distance, and fleeing the scene. Cleveland Heights Police are actively searching for the suspect vehicle and operator involved in the incident.

Manyo sustained serious injuries. She had surgery on her left wrist last week. Several bones were broken—her left leg, three ribs and a vertebra—as well as several teeth. She also sustained severe scrapes, which may require skin grafts. She was rushed to Metro Health Medical Center, where she was treated and has now been moved to a rehabilitation center where she is expected to remain for a while.

Lee Cavendar, a member of the CFSID’s board of directors, visited Manyo on Friday, Oct. 11. “She was in good spirits when I saw her,” he said.

Cavendar is one of several CFSID members that are organizing the Oct. 27 benefit for Manyo. The benefit will be held at Nighttown from 4-8 p.m. A $25 minimum donation, cash or check only, will be collected at the door. Nighttown and other local restaurants will provide hors d’ouevres; local musicians, including Oldboy, will perform; and donated items will be raffled off. All proceeds will benefit Manyo.

“She has a special connection to Nighttown,” said Cavendar. “Years ago, before Brendan purchased it, she was Nighttown’s bartender.”

Kaye Lowe, CFSID director, said that in addition to living in the district Manyo worked for Budding Artist, a firm that maintains the district’s flower displays. “She treats her job of watering Cedar Fairmount’s flowers as if they were her own. Mindy takes such pride in the district and goes beyond the call of duty to help us beautify Cedar Road and Fairmount Boulevard,” said Lowe.

Cavendar said that, in addition to participating in the Oct. 27 benefit, interested residents can donate to Manyo at Fifth Third Bank branches, including the one in the CFSID, at 24261 Cedar Road, where a fund is set up in her name.

For more information or to reserve a spot at the benefit, e-mail sharetheroad2013@gmail.com.

The vehicle involved in the incident was a dark color, 2005-09 Buick Lacrosse, 4-door sedan. The vehicle will have damage to the right front bumper, including damage to the right-side turn signal lens. If you have any information, contact the Cleveland Heights Police Department at 216-321-1234 or call the CHPD “TIP” line at 216-291-5010. Callers may remain anonymous.