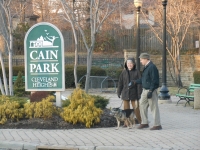 A couple walks their dog in Cain Park. Photo by Hannah Baldwin.

At the Oct. 7 Cleveland Heights City Council meeting, Mayor Ed Kelley declared the Cain Park Dog Project a success and said that the park would remain open to leashed-dog walkers on a permanent basis.

At the meeting, Kerri Whitehouse, a leader of the Cain Park Dog Project, gave an update on the six-month pilot project and formally requested that the city make leashed-dog walking in Cain Park permanent.

“We’re really, really pleased—and surprised that they had already made the decision prior to last night’s council meeting,” said Whitehouse. “Based on previous discussions, we anticipated that a vote would take place at the next public forum meeting. It feels good to be part of something that’s had a meaningful impact in Cleveland Heights.”

“We don’t need to take a formal vote on the matter,” said Kelley. “The volunteers did a great job, making the park safer for young families and others. People are not just walking their dogs—the park has become more of a gathering place.” He said that city staff members would review the status of dog walking in the park every year and that the city could suspend dog walking if problems arise.

Calls to Cleveland Heights City Hall to clarify whether a formal vote will be taken at a future council meeting were unanswered at press time.

A group of volunteers, associated with the Cain Park Neighborhood Association, conducted a resident survey in 2012 and met with city officials to discuss the survey results and petition the city to allow leashed-dog walking on paved pathways at Cain Park on a trial basis. Group members hoped to foster a dog-friendly community in Cleveland Heights as a way to make the park a safer, more welcoming place. The group emphasized dog-owner responsibility by hosting a free workshop on dog behavior and coordinating volunteers to keep pet waste disposal stations stocked with bags.

The city agreed to conduct a pilot from April 15 to Oct. 15 of this year. It asked the group to provide regular updates and work with the city on any issues that might arise. Kelley said that the project ran smoothly and that no major issues arose.

Council Member Jason Stein, who lives near the park, commended neighborhood residents for making the project successful. “I have not received one complaint from residents,” he said. “In fact, I’ve received several positive comments. We had a wonderful summer at Cain Park. There is more foot traffic and more families are using the park. The Dog Project has had a positive effect on the neighborhood.”

“This is one more way to keep people happy about Cleveland Heights, and the Cain Park volunteers have done a great job working with us,” said Kelley. “It takes a group of dedicated volunteers to make this happen.”

When asked if the city plans to extend leashed-dog walking to other city parks, Kelley said, “We will have to wait and see if other groups come forward who are willing to work on the issue for a park that is close to them.”

“The majority of Dog Project volunteers—core organizers and Poop Troop members—live very close to Cain Park, which makes it easy to keep an eye on things,” said Whitehouse. She encouraged interested residents to raise the issue with their neighborhood associations and said that Dog Project members can provide some “front-end guidance.”

For more information about the Dog Project, visit www.clevehtsdogproject.weebly.com or www.facebook.com/CHdogproject, e-mail chdogproject@gmail.com or call 440-478-6226.