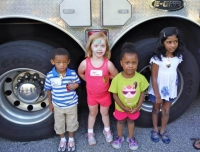 The neighborhood is named after the Potter family, who ran a large dairy farm on the property in the early 1900s. Horace and Florence Potter were jewelers. They both graduated from the Cleveland Institute of Art in 1898. They began making jewelry in their chicken coop and later established a jewelry store in downtown Cleveland.

In 1921, the Potters employed jeweler Louis Mellen in their shop, and incorporated the Potter Studio three years later in 1924. In 1928, the Potters opened a store at 10405 Carnegie Ave., which continued to operate in that location until 2004. Mellen, who managed the store, became a partner in Potter & Mellen, which was well-known throughout Cleveland for fine jewelry, silverware, artwork, china and glassware.

The Potters sold their farm in 1923 and the property was then developed into a residential neighborhood. This year, residents celebrate the neighborhood’s 90th anniversary.

Activities at the Potter Village Block Party included rock 'n' roll by the David Loy Band; a potluck dinner; a visit by a Cleveland Heights fire truck and firefighters; a water balloon toss and card games; arts and crafts; an old-fashioned cake walk; and a raffle, with prizes donated by more than a dozen local merchants.

More than 150 residents attended. According to the leaders of the Potter Village Good Neighbor Association, an organization of residents, it is the largest citizen-run block party in Cleveland Heights.

David Hansen is a resident of Potter Village.