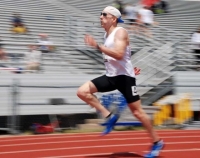 At age 70, Stephen Robbins is on fire.

A celebrated author of organizational behavior and management, retired San Diego State University professor, 2005 inductee into the Masters Hall of Fame and a Cleveland Heights resident for five years, Robbins is not one to rest on the laurels of past achievements. Many years ago, Robbins set out to become what he calls “the world's fastest Medicare recipient.”

While this was his first time participating in the Senior Games, Robbins has been running competitively for 20 years. When he turned 50 years old, he competed in the Masters Track and Field World Championship.

Although Robbins is no longer the fastest Medicare recipient, he is still fast. “That [title] would go to Charlie Allie of Pittsburgh, who is now 66 and running much faster than me,” Robbins said. “I'm merely the fastest 70-year-old in the world. That title and $5 might get me a latte at Starbucks.”

Robbins is currently preparing for the World Masters Championship in Porto Alegre, Brazil. In the meantime, you can find him in his Ambler Heights neighborhood, or on the track.

Chris Hanson is a graduate of the Urban Studies program at Cleveland State University.