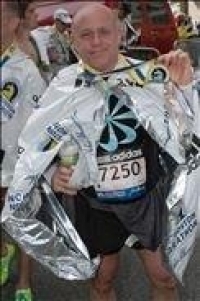 It was meant to be a 50th birthday celebration and a chance to prove he still had the strength to run long distances. University Heights resident Kevin Goodman entered April's Boston Marathon with the hopes of finishing strong, and he didn't disappoint himself. He crossed the finish line at 3 hours, 3 minutes and 14 seconds. (His finish time when he ran the marathon in his 40s was 3 hours, 11 minutes.)

"I'm sure all of my runs through the Heights and my strengthening at Bikram Yoga Cleveland [in Shaker Heights] prepared me for that day," Goodman said.

He was recovering in his hotel room when something shook the building. "At first I thought it was fireworks," he recalled. "Then I saw black smoke coming up over the library building." Goodman called some loved ones to find out if they knew what was going on, then he went outside of the hotel and toward the finish line.

"I saw them setting up for what looked like a war-zone triage," Goodman said. He was impressed with the world-class care the first responders and volunteers were giving the victims. "I talked with doctors who said they had never seen something like this on such a level, but they rallied and they kept the fatality numbers low."

Goodman, like many marathon runners and bystanders, jumped in to help. "What you couldn't do medically, you did in any way you could. You moved people to different locations. You offered a comforting thought. You said a prayer," he recalled.

Goodman received letters from the mayor of Boston and the governor of Massachusetts thanking him for his volunteer efforts on that day. "I'm just glad I was there to help," he said. "I believe in the resiliency of the human spirit. We'll get through this and be stronger because of it."

Back at home, Goodman, managing director and partner of Cleveland's Bluebridge Networks, continues to run and train for future marathons, including next year's race in Boston .

"I'll be there," he said confidently. "I'll be running with an old trackmate, Rebecca Harris Lee, now of New Jersey. She and I ran at Wiley Junior High School 30-some years ago. She was hit by a car and has recovered and qualified for the 2014 marathon. I told her if she got better, I owed it to her to run with her."

Diane Rodio is a writer, editor and public relations expert in Cleveland Heights. BlueBridge Networks is one of her clients.