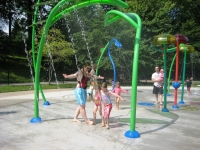 Young Cleveland Heights residents have a new way to keep cool in the summer heat. Cain Park neighborhood residents joined Cleveland Heights Mayor Ed Kelley and council members Cheryl Stephens and Mary Dunbar on July 21 to cut the ribbon to open the new Cain Park Splash Pad. Once the water was turned on, young residents immediately began to explore its many interactive features.

The new splash pad, which has no standing water, replaces the former baby pool at the same site and is intended for the use of children five-years-old and younger. It was constructed by Platform Cement Inc. at a cost of $198,000. Behnke Landscape Architects, with help from city staff, designed the pad, choosing elements from Vortex Aquatic Structures International.

The splash pad is the latest in a series of improvements to city parks that have taken place since Cleveland Heights residents passed Issue 27 in 2004. “The money can only be used for facilities and upgrades in our parks,” said Susanna Niermann O’Neil, acting city manager. “Our residents really understand the value of recreation. We have been able to redo our tennis courts, replace crumbling walls at Cain Park, install a new pool and bathhouse at Cumberland Park, put in new soccer fields at Denison Park—all the playgrounds are in process of being upgraded.”

According to O’Neil, the City of Cleveland Heights made the decision to install the splash pad in 2012. Although the city had hoped to have it ready earlier in the summer, weeks of rain delayed the opening.

“Splash pads are very popular and considered safer for younger children,” said O’Neil. “It [has] tall elements—when children run under them the water comes down like a shower—and small elements, such as little mushrooms that water comes out of.” She said the elements provide a delightful surprise that is entertaining and "not at all scary."

Jason Stein, member of Cleveland Heights City Council, said that the city had sought input from neighborhood residents on the design of the splash pad.

“We met with the city to discuss the design and the types of elements we thought would be fun for kids,” said Peter Titas, a leader of the Cain Park Neighborhood Association (CPNA), which comprises residents from streets surrounding the park. “We also voiced our concerns about age limits and parental supervision. We want to make sure that it is fun and safe for the littler kids that aren't [ready] for the pool, but also accommodating to families.”

“This splash park should help bring more people back to the park," said Titas. He added that CPNA hopes to convince the city to expand the time that the splash pad is open to include morning hours. “As parents of toddlers, having an activity in the morning would be great,” he said.

O’Neil said the rules and regulations for the splash pad are similar to those of the baby pool it replaced. It is for use by preschoolers, under 48 inches tall, who must be accompanied by a parent or adult who is a Cleveland Heights resident with a recreation ID.

O’Neil said the city is considering a similar splash pad to replace the baby pool at Cumberland and that Turtle Park, a favorite of the five-and-under crowd, is also getting an upgrade this summer. “We are installing new equipment and a sun screen,” she said. The sun screen will be installed on the Euclid Heights Boulevard side of the park over benches and a portion of the play area. “But don’t worry,” she said. “The turtle will stay. We will never take him away.”

Stein said that the playgrounds at Denison Park, Cain Park and Caledonia all have special features for young children, while the playgrounds at Forest Hill and Cumberland are built for all ages. For more information about parks and recreational facilities in Cleveland Heights, visit www.clevelandheights.com.