Former manse at Fairmount Presbyterian to be moved or demolished

by Alastair Pearson and Bob Rosenbaum 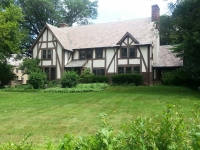 In about a year’s time, the 101-year-old home that served as the residence for Fairmount Presbyterian Church’s pastor will be gone.

From 1968 until early 2011, the house served as the church’s manse for four consecutive pastors.

After more than two years of deliberation, during which the structure was unused, the congregation has decided to try to sell the house to someone who will move it to another location. If such a buyer cannot be found by June 30, 2014, the church will demolish the house. In either case, the church intends to retain the property.

There currently is no plan for how the property will be used.

The city’s law department has not reviewed the particular situation in sufficient detail to determine whether some sort of city review may be required in order to move or demolish the house. John Gibbon, the city’s law director, has asked the church’s attorney to keep him advised of the church’s plan for the property.

The property is zoned for residential use, which means that after the house is removed, the church will need to apply to the City of Cleveland Heights for a conditional-use permit for any other use of the land.

The house is a Tudor Revival structure, built in 1912 and designed by Meade and Hamilton, Cleveland architectural firm. It is a contributing structure to the Fairmount Boulevard and Shaker Farm National Register Historic Districts. The church bought it in 1968 with $53,000 donated by congregants.

The last pastor to use it as a residence was Louise Westphal, who left in February 2011 to lead a church in Colorado.

According to Lee Chilcote, an ordained elder in the church and a former clerk of its governing Session, the practice of maintaining a pastoral residence has fallen out of use. Most pastors now prefer to select and buy their own home—sometimes facilitated by a loan from the church.

As a result of this, a five-member task force was assembled in December 2012 to gather input from the community and congregation, and recommend how the property should be used or disposed of. As part of that process, a public meeting was held earlier this spring seeking community input.

On June 5, the Session approved the task force’s recommendation: to seek a third-party buyer who will agree to relocate the building and fill in the basement at his or her expense.

The church has set aside $25,000 to cover improvements needed to make the home saleable, and may spend up to $100,000 for inducements to a purchase agreement.

The final sale would need to be approved by the Session, trustees and congregation. If no agreement has been presented to Session on or by June 30, 2014, the house will be demolished.

Editor’s note: Deanna Bremer Fisher, publisher of the Heights Observer, is a member of the Historic Fairmount Association, which has sent a letter to the congregation stating its opposition to the removal of the house. She did not participate in writing or editing this story.

Alastair Pearson, a Cleveland Heights resident, is a student at Saint Ignatius, where he edits the school newspaper and literary magazine. He is a summer intern at the Observer.

Bob Rosenbaum is a longtime contributor to the Observer.