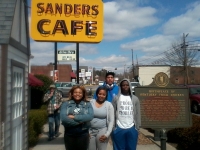 From March 20–22, the Heights Tigers Keystone Club of the Heights Youth Club (HYC) participated in the Boys and Girls Clubs of America National Keystone Conference held in Atlanta, GA. Members of the club earned participation in the All Teens Lead conference, along with 1,800 other teens, by performing community service projects and by taking part in career prep and college tour activities. The teens reported that it was a great opportunity to meet new people from all over the United States and build new friendships.

During the conference, the teens toured several colleges and universities in the Atlanta area. Malik Spivey, a Heights High junior, said that he is going to now apply to Gordon State University, located outside of Atlanta.

Each morning began with a general session where motivational speakers encouraged participants to think about what it takes to achieve success. Victoria Lewis, a junior at Heights High, said, “The afternoon sessions were the most entertaining and included mini concerts from B.o.B, the OMG Girlz, Jordin Sparks and Doug E. Fresh of Run DMC.”

“The mini concerts felt like a reward for the hard work I did throughout the year,” said Kylia Washington-Ross, a Heights High sophomore.

At the conference, the HYC teens partnered with UPS in planting trees at a local Atlanta park. Members of the Heights Tigers Keystone Club had worked with UPS at HYC when the club hosted UPS Road Code, a simulated driver-safety program designed for teen drivers.

The teens also participated in several other activities, such as the Taco Bell Foundation’s Commitment to Graduate initiative, in which the teens sign an online pledge to volunteer in the community and graduate from high school.

After attending the conference, the teens report that they are motivated to push forward and do bigger and better things. One of their goals is to earn the privilege to attend next year’s conference in Anaheim, Calif.

You can support The Heights Tigers Keystone Club by attending the Taste of the Heights fundraising event June 6, from 6 to 9 p.m. at HYC. Proceeds from the event support HYC’s mission of providing high-quality programming that enables Heights children to reach their full potential as productive, responsible and caring adults.

Kimberly Morgan is the board administrator for the Heights Youth Club Board of Directors.